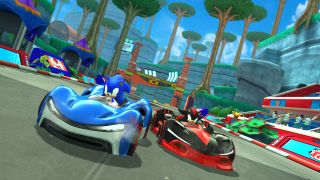 In Sonic Team Racing, Sonic and his hedgehog pals are the focus. Ring challenges, showdown races, battles with eggbots, and multiple types of target smashing courses litter the campaign. Each bringing their own nuances and strategies.

Team Sonic Racing also puts a focus on the team over the individual so you'll need to get used to collaboration on the racetrack. You'll want to lean on your teammates for extra items, boosts, and special moves that can change the flow of the race. Although there are still plenty of things you can do on your own to excel behind the wheel.

Only drift when you have open space

Starting a drift can feel sluggish and blocky, almost as if you were better off driving straight. Don't drift unless you have the space ahead of you, smaller drifts don't bring much help you much in making tight turns or gaining a speed boost. Drifting is still important, just make each one meaningful.

Boosting is the name of the game in kart racing and Team Sonic Racing is no different. Drifting and slingshotting are two of the basic types of boosts you'll use while playing, why not combine them?

You can drift in a near straight line by pushing your wheels (the control stick) in the opposite direction from your drift. Combine that with a slingshot, riding in your teammates trail to gain a boost, and zip by your enemies.

Ride in your teams trail for as long as possible

Slingshots are incredibly useful. Every time you're near one of your teammates you should be alternating between giving and taking slingshots boosts from behind one another. The longer you stay glued to the golden trail your partners kart leaves behind, the further you'll go. Skip the shorter shots and go big—look for sparks on your kart while riding their trail to now how much boost you've built up. Once it stops sparking it's time to use the boost.

Focus on gaining time in side modes

Side modes are probably the most challenging thing about Team Sonic Racing. Getting a platinum medal in ring challenges, bot busting, and target smashing is something many won't take the time to do.

The key in almost every one of these modes is to focus on getting extra time. Most of them, like the ring collecting or drifting challenge, give you a few more seconds of time for doing a certain move while driving.

That could be drifting while collecting rings or destroying eggbots. Whenever you have the chance to gain a few more seconds, even if it means losing out on some easy rings or targets, focus on that. More time will give you more chances to keep your streak alive.

Rings are a staple of the Sonic series and are incredibly frustrating in Team Sonic Racing. The golden loops are placed sparingly throughout each course and you'll collect a hefty amount over each of the three laps. However, if anything touches you though, including enemy items and obstacles, you'll lose everything in a single sweep.

Some missions do have side goals that require you to collect more rings, but others races ignore rings altogether. Don't sweat it if you miss some going through. They come and go easily.

Press square before a mission to see the cutscene

This is an odd design choice. Using the normal confirmation button, X on PS4 in this case, actually skips past the cutscene when selecting a mission. You need to hit square to see cutscenes, including all their poor character art and voice acting, before starting a race.

While it might be easier to handle changing kart parts out in the garage, you can also do so before every race by selecting the loadout option after picking your character. The menu is smaller but it's useful for a quick last minute tune up.

Don't forget to use your credits on mod pods

You'll gain a hefty amount of credits as you work your way through the campaign. Take a break every time you earn 50 and exit out of the campaign, select the mod pod option in the main menu, and buy a few pods. Their outcome is random, like a toy machine, but every pod will hold either a cosmetic item, performance car part, or a bonus block. They cost 10 credits each so you'll be able to stock up soon after starting the story mode.