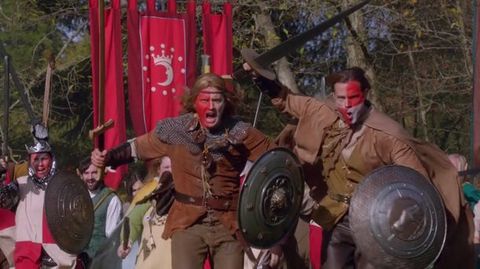 THE ONE WHERE Sam and Dean bump into a familiar face while investigating the death of two LARPers.

VERDICT This isn’t the first Live Action Role Playing episode ( Supernatural already tackled it, kinda, in “The Real Ghostbusters”) and it’s unlikely to be the last, but we’d surprised if anyone manages to top “LARP and the Real Girl” for sheer giddy fun.

I’m not even the biggest Felicia Day fan, but this episode had me beaming from ear to ear from the moment a man got ripped limb from limb in the comfort of his own bed to the joyous climactic charge into battle. The episode’s default setting is “incredibly silly” and Charlie is toned down a little from her debut last season (thankfully there’s no Katrina and the Waves…), which makes all but her most outlandish turns of phrase more-or-less bearable. A warning, however: if anyone in real life says “bee tee dubs” (as in BTW) in earshot of me I will not have nice things to say.

It’s a monster-of-the-week episode, but for once there’s a good explanation why the brother’s aren’t following the arc – they’re waiting on Kevin to decipher the demon tablet! It’s also an episode full of inspired moments – Gerry seeing through Sam and Dean’s FBI disguises because he’s a roleplayer who knows a thing or two about authentic costumes, or buying the spellbook off eBay, for example.

By highlighting LARP’s eccentricities for the sake of entertaining television, it treads a fine line between mockery and loving recreation. But well before the final dedication crawl throws their intentions in your face it successfully portrays Moondor something not to be sneered at, and not just because of the girls. Even Dean gets swept up in it enough to spend the best part of the episode in costume, despite the fact Sam is free to wander round as a “time traveller”.

The master’s secret identity isn’t much of a surprise and the direction is a little bland in places, but in every other aspect “LARP and the Real Girl” is a wizard episode.

FEATURED MUSIC " China Grove " by The Doobie Brothers plays in the Impala during the opening moments of the episode.

REFERENCE OVERLOAD Fifty Shades of Grey (“Fifty Shades of Grey Fox”), History of the World Part 1 (“It’s good to be queen”), 30 Rock (“Oh blerg!”), The Empire Strikes Back (“I love you” “I know”), Braveheart (Dean’s rousing speech at the end), Notting Hill (“I’m just an IT girl standing in front of a monster asking it not to kill her.”) and even Carly Rae Jepsen (“Call Me, Maybe”)

IN-JOKE Robert Singer reads the dedication to LARPers that scrolls onscreen before the closing credits.

BOOK OF SPELLS Charlie destroys Gerry/Gilda’s spell book in a remarkably similar fashion to the way Harry destroys Tom Riddle’s diary in Harry Potter and the Chamber of Secrets .

DID YOU SPOT? In the technical tent several of the screens can be seen playing the Dragon Age 2 DLC Mark of the Assassin , in which Felicia Day played an elven assassin called Tallis.

TITLE TATTLE The episode title is a reference to the 2007 Ryan Gosling film Lars And The Real Girl in which the hunky hunk goes full weirdo and has a relationship with a doll.

WHAT’S IN A NAME? Charlie’s new moniker is Kira Heinlein, a reference to a famous sci-fi author as with her real last name, Charlie Bradbury.

BEST LINE
Sheriff Miller “These kids today with their texting and murder.”