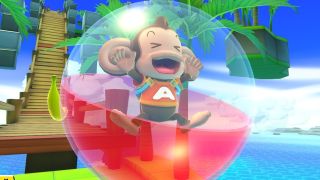 Update: Nintendo of America has confirmed that Super Monkey Ball: Banana Blitz HD is coming to the west, at least on Nintendo Switch. You'll be able to start playing on October 29.

Original story: The Super Monkey Ball series is officially rolling back around after years off the ball. Japanese game magazine Famitsu has shared the first look at "Tabegoro! Super Monkey Ball", which according to a translation by Gematsu will be a PC/PS4/Switch remake of Super Monkey Ball: Banana Blitz, which first hit Wii back in 2006. If you're wondering, the new name roughly translates to "Ripe to Eat! Super Monkey Ball".

The Super Monkey Ball remake will hit Switch and PS4 on October 31 in Japan, with the PC release date yet to be announced. We also don't know if Sega plans to release the game outside of Japan, however the company has been on a good streak of localizing seemingly niche titles recently, so there's a decent chance.

If you aren't familiar with the series, a) you probably didn't own a GameCube in 2001, and b) they're all cute skill-based games about controlling a monkey in a hamster ball as it rolls down precarious slopes and around hazards while picking up bananas. A whole bunch of them came out over the years, with the last one being a mobile game called Super Monkey Ball Bounce released in 2014.

Super Monkey Ball: Banana Blitz was a motion-controlled game from the early days of Wii, which makes it a somewhat surprising pick for potentially reviving the series on modern systems. Then again, it could feel like a whole new game if Sega tweaks it to use a more traditional control scheme, so maybe it's a brilliant move. The full reveal for Tabegoro! Super Monkey Ball will arrive in the next issue of Famitsu on July 18, so hopefully we'll learn more about the game (and perhaps its prospects for an international release) then.

This could be the perfect game to take for a spin on your stylish and svelte new Nintendo Switch Lite.