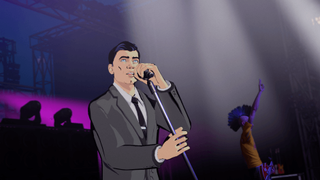 Rock Band 4 had a rocky start, but it looks like Harmonix is ready to cut loose and have some weird fun. The Rock Band Rivals expansion pack, available now for $30, brings with it a revamped career mode where you play through a documentary about your band, weekly challenges, and most important of all, the song "Danger Zone" by Kenny Loggins, which can be sung by none other than Sterling Archer.

Unfortunately, it doesn't look like H. Jon Benjamin, the voice of Archer for the show, will be joining your crew - this Archer is just cosmetic. Still, that's pretty freaking cool, and indicative of a larger direction the game seems to be taking. While you could always get a bit weird and cartoonish with your character customization, Archer is literally from another universe.

And speaking of things from another universe, you can now enjoy some Mass Effect: Andromeda-themed items for your band, including a Pathfinder outfit and guitars modeled after the Tempest and Normandy.

I admit I wasn't too keen on Rock Band 4's direction when it launched, but if we can expect more of this weirdness that just makes the game more fantastical and fun, I might reconsider my stance.