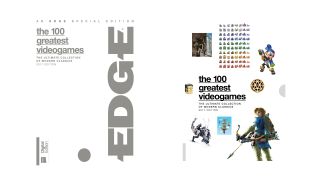 Edge magazine's 'The 100 Greatest Video Games' is a must-read for video-game fans new and old. Worth £15.99, this collection of the best games of all-time features contributions from from Edge magazine's respected journalists to collate a master list of games that includes League of Legends, Shadow of the Colossus, and Metal Gear Solid 5: The Phantom Pain. Best of all, you can claim an ebook version of this compendium for free, just by registering your vote for the 35th Golden Joystick Awards Presented by Omen with HP.

'The 100 Greatest Video Games' has editorial contributions from games writers, along with artwork showcasing the visual design of the world's best games.

If you already own this book, or would rather read something else, you can also choose from 'The PlayStation Book, 2nd Edition', PC Gamer's 'The Best PC Games Ever', 'Nintendo Switch', 'The Ultimate Guide to Minecraft Vol. 20', and 'The Retro Gamer Book of Arcade Classics, 2nd Edition'. You'll receive instructions for claiming your gift via email after you've submitted your votes.

The 35th Golden Joystick Awards will be hosted by comedian and Assassin's Creed star Danny Wallace, and takes place on November 17 in London. Catch the official Twitch livestream to watch the ceremony as well as interviews, trailers, and more.