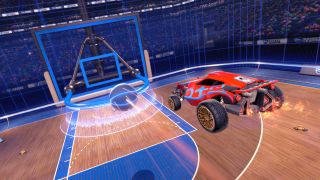 Car soccer fans won't have to wait much longer to trade their cleated tires for Air Jordan all-weathers: developer Psyonix plans to add the Hoops mode to Rocket League as a free update on Tuesday, April 26. It marked the announcement with this buzzer-beating trailer (and yes, Nike has a monopoly on athletic tire sponsorships in my Rocket League headcanon).

Aside from giving new meaning to the term "air ball", the high-flying automotive sport will join the big leagues with an official NBA flag pack on Tuesday. The $1.99 pack comes with an antenna topper for all 30 teams, so you can fly the proper colors no matter who you support - and whether or not you're actually playing Hoops. The patch will also come with a free NBA logo flag.

Basketball is the second new sport added to Rocket League, after it sent players slamming into oversized hockey pucks over the winter. I hope Psyonix keeps the new modes coming, even if soccer remains the rightful focus of the game. Ooh, maybe all the other modes could feed into one Olympic-style playlist!