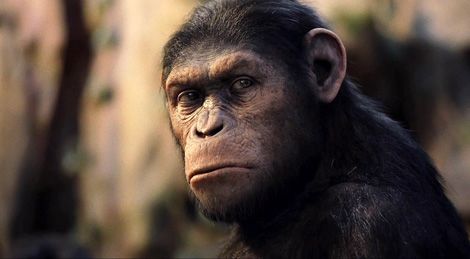 A decade has passed since Tim Burton’s Planet Of The Apes reimagining – time enough not just to upgrade its old-school prosthetics with photorealistic CG hominids, but also to learn from its mistakes.

In thrall to his 1968 inspiration, Burton produced an inferior copy that, rather like Mark Wahlberg’s character Leo, didn’t seem to have a single idea in its head.

Rupert Wyatt’s reboot-slash-prequel rights that immediately by being about something: animal testing, nature versus nurture, the perils of DNA tinkering. This time around, it’s not just the apes that have above-average intelligence.

In a lush, far-off jungle, a female chimpanzee is seized by poachers and relocated to a hi-tech lab in San Francisco, a journey telescoped via a single zoom in and out of her panic-stricken pupil.

It’s a technique – used again later to elide her son Caesar’s transition from baby orphan to inquisitive, hyperactive infant – that instantly forges an empathy between ape and audience.

And it’s one that is only bolstered by the trials Caesar undergoes as he progresses from being scientist James Franco’s pet-cum-experiment – the key to a serum that could reverse his dad’s Alzheimer’s – to eventually instigating a full-blown monkey rebellion.

Those ordeals include his forcible detention in a squalid animal shelter and bad treatment at the hands of both Tom Felton’s sadistic custodian and his fellow primate inmates.

Is it any wonder we’re rooting for him to cast off his shackles? It’s classic hero stuff: the boy who would be king, evolving before our eyes into a leader, fighter and military strategist.

Indeed, if Andy Serkis’ soulful, performance-captured portrayal achieves anything, it is to make Caesar a chimp of thought as well as action.

Yes, /Rise/ has its flaws. As Franco’s profit-obsessed boss David Oyelowo might as well come on twirling a moustache (“I run a business, not a petting zoo!”), while Freida Pinto is a sententious, preachy pain as his primatologist girlfriend (“Some things are not meant to be changed!”).

Yet any cavils are long forgotten by the time the movie reaches its jaw-dropping crescendo, a spectacular bout of gorilla warfare on the Golden Gate Bridge that leaves several of the summer’s blockbusters for dust.

In putting the apes firmly at the heart of their own franchise, while still referencing backwards with a few well-placed, Heston-related in-jokes, Wyatt has given a moribund property a whole new lease of life.