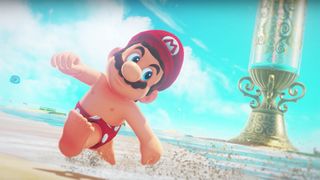 Nintendo and Illumination Entertainment (Despicable Me, The Secret Life of Pets) have been in talks for more than a year and are close to signing a deal to make an animated Mario movie, according to The Wall Street Journal.

Sources close to the talks said the biggest hurdle for Universal Studios (which owns Illumination) is convincing Nintendo that it will retain a satisfactory degree of creative control. Not a surprising sticking point for Nintendo, especially considering the teensy little shadow hanging over this whole deal: the 1993 Super Mario Bros. movie.

It was the film so terrible that stars Bob Hoskins and John Leguizamo admitted to being frequently drunk throughout production, and Hoskins would label it as the worst movie he ever made. The script was said to have daily rewrites, and aside from some affiliate-produced Pokemon TV programming and movies, Nintendo has stayed out of Hollywood since. Well, Bowser showed up in Wreck-It Ralph, but that was more of an Easter egg.

So how much chance is there of this actually happening? Pretty decent, actually. Universal and Nintendo already have an arrangement in place for attractions based on Nintendo properties to be built at Universal's theme parks, so the companies have done business before. And by now I think enough time has passed that we can forgive... whatever this was.

Should the deal go through, the report suggests that we won't see anything of it for a few years. This is all pre-production talk, and Shigeru Miyamoto is said to be interested in serving as a producer - he tends to take his sweet time with things.