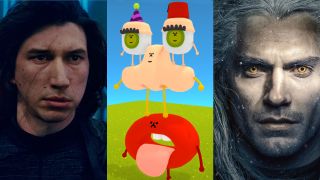 The director of Katamari Damacy has been constipated for 6 years (that's using his words). When Wattam comes out on Tuesday, he'll finally be relieved. The game will look familiar, but probably still strange, to fans of Keita Takahashi's previous work, but the only thing you need to enjoy Wattam is a healthy appreciation of silly things happening in the world around you - like a tree eating people and turning them into fruit, then a mouth eating them and turning them into poop, then the tree eating the poop and turning it back into people. Then you grab your friends by the hand and go on a trip to someplace new. If you're feeling the holiday blues, let Wattam's sun (which is a playable character) shine into your life.

What: Wattam
Where: PC and PS4
When: December 17

2. Moxxi’s Heist of the Handsome Jackpot DLC lets Borderlands 3 bring back a series icon for one last hurrah

As if Borderlands 3 hasn't spoiled us enough with its reams of free content drops, hot fixes, and limited time events over the last few months, the game's first batch of paid story DLC arrives later this week with Moxxi's Heist of the Handsome Jackpot. Assigned to retake Handsome Jack's private casino station from its crazed inhabitants, there's every chance our Vault Hunters could come face to face with the man himself by the expansion's end, or at least his surviving AI clone from Tales from the Borderlands. In any case, expect plenty more looting and shooting in this first of four DLC packs on the way for Gearbox's massively successful FPS adventure, which will no doubt be just as absurdly entertaining as its base campaign.

What: Borderlands 3 - Moxxi's Heist of the Handsome Jackpot
Where: PC, PS4, and Xbox One
When: December 19

Heard of it? Of course you have. J.J. Abrams is back to direct his second movie in a galaxy far, far away and he promises that Star Wars: Rise of Skywalker will bring to end not only the Skywalker saga, but over 40 years of Star Wars storytelling. By now, you’ve probably seen the countless teasers, trailers, and TV spots that have given us a glimpse at everything from Lando’s return to Palpatine’s presence. So, let’s focus on something else, something more pressing for the spoilerphobic among you – release dates.

Yep, those in the US will have to wait another agonising 24 hours for Rise of Skywalker compared to those across the pond. It’s out on December 19 in the UK as opposed to December 20 Stateside. So put up your social media blast shields: filters, fingers in your ears, and all the rest of it. This is the end, and you don’t want a single moment ruined for you beforehand.

What: Star Wars: The Rise of Skywalker
Where: Theaters
When: December 20

4.  You can see a star-studded cast take on the form of bipedal cats this December

Back in July the world got its first look at the new film adaptation of Cats directed by Tom Hooper (of Les Miserables and the Danish Girl fame), and it sure was something. With a massive line-up of recognizable faces including Judi Dench, Ian McKellen, Idris Elba, Taylor Swift, Jason Derulo, and Jennifer Hudson, there's something so uncanny about seeing them take on the form of cats with human faces. Based on the collection of poems by T.S. Eliot and Andrew Lloyd Weber's musical adaptation for the stage, the whole premise of the story is pretty wild. A cat tribe known as the Jellicles have to decide which member will ascend to something called the "Heaviside Layer" and have a new life to "be who they've always dreamed of being."

What: Cats
Where: Movie theaters
When: December 20

5. The Witcher drops its world of men, monsters and Bathtub Geralt onto Netflix

The Witcher has come a long way from its ill-fitting wig beginnings. That first heavily-memed reveal of Henry Cavill’s Geralt of Rivia has melted away. In its place, a hotly-anticipated Witcher Netflix series that aims to fill the Game of Thrones shaped hole in our heart with its own brand of clashing swords, sorceresses, and, uhh, Geralt in a bathtub. That’s there too.

Showrunner Lauren S. Hissrich has even told sister publication SFX that this is just the start, with plans for "seven seasons" already outlined. So, if you’re looking for a binge over the holidays, look no further than The Witcher this week. All eight episodes drop on Friday and promise career-defining performances from relative newcomers Anya Chalotra as Yennefer and Freya Allan as Ciri.

What: The Witcher
Where: Netflix
When: December 20