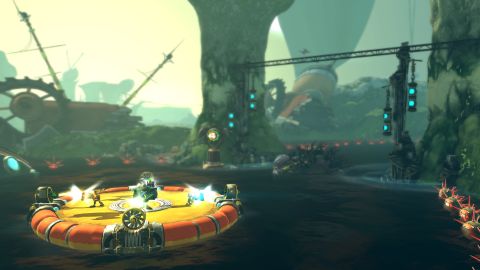 Ready for another adventure with a certain Lombax and his robotic best friend? Insomniac’s next title in the R&C series: Ratchet and Clank: All 4 One takes on a different perspective, giving gamers a chance to play with up to four other teammates. With a new main co-op feature that utilizes collaboration on puzzles, wacky weapons and different playable characters for once, All 4 One casts a wider net than other co-op games this fall.

When we last left our heroes, they had saved the universe from the evil Dr. Nefarious again. It seems like they have only just taken a break from hero work when another crisis arises. A mysterious army of unidentified robots appears and begins creating trouble with unknown motives, capturing Ratchet, Clank, (now President) Qwark, and Nefarious all in one blow. Putting aside their differences, the foursome must come together to escape their plight, and as more of the insidious robot operation is uncovered, Ratchet decides he'll have to step in to galactic affairs once again to set things right. The story fits into the Ratchet and Clank style, but seems a bit tacked on to match the gameplay. There are very few (un-skippable) cutscenes, which make it hard to follow the story, but they still have the humor and snarky lines we’ve seen before.

As it says in the title, up to four players can go co-op through the story, online or local. Playing with even just one other person has immediate benefits. Execute enemies faster by spot focusing on one with other members with the same weapon. Players weapons will ramp up and project faster, dealing more damage. Experience also increases for completing team-based actions. The end of each level offers additional points for various goals completed, like most kills or most collected bolts, which can only be awarded to one player at a time, still giving the game a slight competitive edge to it.

Although it’s more fun to play with others, All 4 One can be played solo with an AI-controlled Clank in tow. The AI is surprisingly well-suited to filling in the gaps, doing its part with puzzles, and automatically helping heal when you take a lot of damage. The only problem is you can’t control the AI and give it commands (like in Portal 2 co-op mode); in fact, the only command you can give it is to call it back to you. Still, it's possible to complete all co-op based actions with only a few minor annoyances.

Like in past games there are puzzles to solve, but they tend to feel simplified. It's good that they don't interrupt the action heavily, but it would have been nice to see some more complexity given the co-op nature of the game. They offer a quick break from the run-and-gun but aren’t up to par with some of the cleverly designed time-bending puzzles from Ratchet and Clank Future: A Crack in Time.

The over-the-top quirky weapons are a memorable part of the series, and in All 4 One, there's a great variety to choose from. Each character has specialized weapons relating to their play style. Clank gets a Zoni Ray to slow down enemies, Dr. Nefarious sneaks around invisibly with a Cloaker, and Qwark can employ an “assassination-proof” Quantum Deflector shield. These and other weapons allow for upgrades based on bolts acquired through the levels. Some old returning favorites include Mr. Zurkon, the powerful war bot ally, and the trusty Combuster ray gun. One of the more interesting new tools is the Critter Strike, which turns foes into harmless creatures. Speaking of critters, you can suck up chubby creatures roaming around levels with the all new Vac-U suction gun to unlock secret labs within the game.

Graphically, the Ratchet and Clank franchise has carved out a unique flavor that fans of the series have come to expect, and this title delivers to expectations. Insomniac has mastered their craft; environments are stylized, exteriors blending nature and cartoony sci-fi machinery, interiors well-equipped with interesting décor and gadgets. In wide vistas, a beautiful depth of field effect accentuates atmosphere. Each new world serves up fresh and attractive visuals, from futuristic cities to polar ice caps to enchanting bioluminescent forests.

Ratchet and Clank: All 4 One is fun to play with others, whether it be local or online. Insomniac has done a great job of creating engaging cooperative play in the otherwise single-player series. This probably would have been better suited to the PSP, considering its minimal cutscenes and a story not as gripping as previous entries. Despite these low points, Ratchet and Clank: All 4 One still feels like it fits within the R&C franchise so many fans have grown attached to.