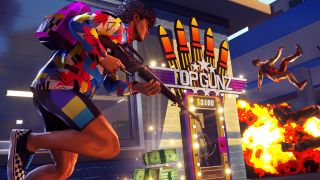 With the explosive popularity of Fortnite and PlayerUnknown's Battlegrounds, the list of battle royale games like PUBG will only keep growing. Radical Heights is the newest contender to the burgeoning genre: a self-described "battle royale with cheese" that goes all-in on 1980s nostalgia, with the regrettable hairstyles, x-treme fashion, and every color of the neon rainbow that entails. It's the newest project from Cliff Bleszinski's studio, Boss Key Productions - the same team behind the excellent FPS LawBreakers which sadly crashed and burned after launch. You can get a glimpse of this free-to-play battle royale shooter in the reveal trailer below before it launches onto Steam Early Access on April 10 (also known as 'tomorrow').

Unlike the hardcore, Overwatch-meets-Tribes intensity of LawBreakers, which likely scared off plenty of would-be players, Radical Heights is opting for a tongue-in-cheek tone revolving around a gaudy game show in the '80s-themed future of 2023. But beyond all the puffy vests, aloha shirts, and varsity jackets, there are some key gameplay mechanics that set the free-to-play Radical Heights apart from its battle royale peers. Chief among these is an in-game currency system that lets you keep cash between matches whether you win or lose, meaning you can decide to splurge or save your earnings when buying weapons during each game.

It also aims to mix up the now-familiar shoot-and-scavenge gameplay of battle royale with 'Game Show moments', which manifest as carnival-style kiosks you can interact with for rewards (or watch someone else play before killing them and taking any winnings for yourself). You'll also be able to pop wheelies on BMX bikes, though that sounds a lot more life-threatening than cruising around a chaotic warzone in a car. It doesn't look like Radical Heights has any building systems a la Fortnite, but instead offers goofy deployable gadgets like "workout trampolines to confetti bombs, inflatable decoys to remote explosives, and more."

As should be the case in these microtransaction-sensitive times, real money can only be spent on cosmetics that have no bearing on the actual gameplay. It'll be interesting to see if Radical Heights can pull players away from the monolithic Fortnite, though the zero barrier to entry that comes with being free-to-play does give it a leg up over the $30 price tag on PUBG. You can jump in and find out for yourself when Radical Heights enters Steam Early Access on PC starting April 10, and if you take a liking to it, there's a $15 Founder's Pack on offer for some exclusive cosmetics. For more of Radical Heights neon-pink carnage, check out more screenshots from the reveal below.