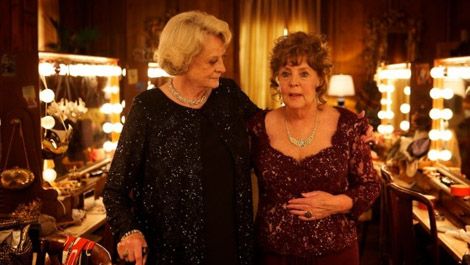 But then their director is no spring chicken either, septuagenarian Dustin Hoffman having just as much right to a free bus pass in the country where his first feature is set.

Quite why it has taken Benjamin Braddock so long to step behind the camera is anyone’s guess.

Yet he proves an efficient enough ringmaster in this gentle portrait of nursing home oldsters, set in a facility for retired opera stars whose declining capacities don’t stop them acting like divas.

Yet Quartet has the edge on John Madden’s 2011 outing, its poignancy feeling honestly and legitimately generated as opposed to cynically engineered and laid on with a trowel.

Pauline Collins is especially effective as a kindly biddy gradually losing what is left of her marbles, while Tom Courtenay embraces the chance to play a romantic hero in his role as a tetchy tenor whose hopes of a “dignified senility” are shattered by the arrival of old flame Maggie.

Yes, Michael Gambon is preposterously hammy as kaftan-sporting despot Cedric, while a scene in which Courtenay likens opera to rap for the benefit of some teenage visitors feels like a pathetic sop to a fantasy demographic (Hoodie-wearing Verdi fans? Mozart lovers with ASBOs?).

It’s hard, too, to care that much whether the titular foursome resolve their differences in time for a climactic charity concert.

Still, picking holes in Quartet is like playing a practical prank on your nan. Sure, it’s fun while you do it, but you’re bound to feel bad about it afterwards.