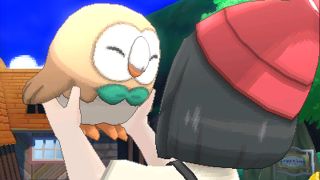 In just a few months, eager Pokemon trainers will be able to pick up Pokemon Ultra Sun and Ultra Moon, the revamped versions of Nintendo's latest entry in the main Pokemon series. Ultra Sun and Ultra Moon introduce new features, including a new Pokemon evolution for Rockruff, new fashion styles for trainers (no more chicken hat!), new moves to use in battle, and even a new plot to follow. You can check out some of these features in a new trailer released by Nintendo:

"In Pokémon Ultra Sun and Pokémon Ultra Moon, a new story unfolds featuring Necrozma alongside the Legendary duo [Solgaleo and Lunala]," a press release teases. "Ominous dark clouds begin to spread and the secrets of Necrozma and the Alola region, which were never disclosed in the previous games, will finally come to light." If that sounds like a bunch of proper nouns with no meaning, let me sum up:

Pokemon Ultra Sun and Ultra Moon are a curious duo for Nintendo's pocket monster franchise. Unlike previous director's cut-style entries, which would introduce a new gem or color (as with Pokemon Crystal and Pokemon Emerald, for example) Ultra Sun and Ultra Moon are adding new features and story but remaining separate games. You can pick both up in a "Ultra Dual Edition," but for all intents and purposes, these are two separate games. There is no 'one game to rule them all' version this time.

Pokemon Ultra Sun and Ultra Moon will arrive November 17, one day shy of exactly a year since regular Sun and regular Moon.