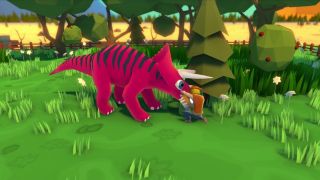 The sign of a good management sim game is one where, after what feels like a few mere minutes of playtime, you glance back at the clock and, oh, would you look at that, it’s already 2:00 AM. These experiences are deceptively laid back, nourishing the brain with gentle hits of dopamine through a carefully constructed conveyer belt of in-game micro-successes.

You can see why we fickle humans are susceptible to their algorithms, too, indulging our petty power fantasies of creating order from chaos, pursuing clearly defined goals, and generally succeeding in adulting better than most of us ever could in the real world. Whether it’s building megacities from scratch in Cities: Skylines, running a medieval cemetery in Graveyard Keeper, or living the pastoral dream in Stardew Valley, management sims can hold our attention in ways few other genres are capable of.

And Parkasaurus, out now through Early Access on Steam for PC players, is up there with the very best of them. Offering the opportunity to create your own dinosaur resort, Parkasaurus may lack the brand recognition of Jurassic World Evolution, which presented a similar conceit earlier this year, but does enough differently to escape the footprint left by Frontier Development’s AAA boot.

While that latter title was focused mostly on the hypothetical science and logistics of dinosaur zoology, Parkasaurus takes more cues from the Theme Park games of old to emulate the commercial tourism that would naturally boon if anyone managed to bring prehistoric creatures back from extinction.

Sure, taking care of raptors, ‘rexes, and the odd Rebbachisaurus is one thing, but what about the insatiable hunger of your average homo sapiens? Every single visitor who enters your resort in Parkasaurus will have their own opinions on the admission fees, entertainment, cleanliness, food options, and more, with many happy to post about it on the in-game social media feed which pops up at the end of each working day. Pleasing your guests may even come at the expense of your dinosaurs’ own well being, such as when you ignore the latter’s need for privacy for the sake of public visibility, forcing you to juggle with the same ethical questions that Jeff Goldblum first posited in Jurassic Park 25 years ago.

For an indie game made by just two people, the amount of content already included in Parkasaurus is staggering. The game’s two skill trees, each promising new dinosaurs, buildings, and items to play with, will take some real time to fill out completely, and are  refreshingly generous in their drop rates. It feeds into that ‘just five more minutes’ mentality which the game exploits as effectively as any other management sim, and Parkasaurus’ more relaxed sentiments against Jurassic World Evolution means you’re less likely to be discouraged or angered by any major setbacks to your resort’s growth.

That said, it wouldn’t be a dinosaur park sim without the possibility for a bloody breakout, and when that happens, Parkasaurus becomes a different game entirely. It turns into a first person shooter, in fact, where you’re suddenly placed into the boots of one of the security guards responsible for taking out the rampaging beasts. It’s a wild, hilarious change up from the relative relaxation of micro-managing from above, and again harks back to the original Theme Park games, when you could explore your own creations from a first person perspective and delight in the delirious, otherworldly look of the place when viewed from up close.

Indeed, Parkasaurus has a real affable charm in its total lack of gravitas. The story set up, and there is one, makes no apologies for its total barminess. After dinosaurs crash land their spaceship on earth, scientists are able to go back in time through a portal to uncover ancient fossils, which can then be used to create even more dinos by hatching them from a local chicken downtown. I wasn’t kidding when I said it was barmy.

These dinosaurs are way cuter than Jurassic World Evolution’s more realistic take on the creatures, too, but also quite a bit goofier, with big googly eyes that look like they’ve been pinned on by a giant toddler. You can even deck them out with hats unlocked through Parkasaurus’ progression system, with anything from winter beanies to sunglasses available for pimping out your reptilian residents with added style and swagger.

Meanwhile, the game’s lo-poly visual palette effectively draws the eye, and compliments the grid-based creation system just as its catchy soundtrack perfectly matches the leisurely rhythms of the gameplay. In fact, Parkasaurus is almost too charming, hiding its chewy layer of strategy and statistics beneath a mound of silly hats and googly eyes. Because make no mistake, this is a tightly wound sim easily on par with its contemporaries, where creating the perfectly designed attraction is so satisfying, it’ll gobble up your free time like T-Rex with the munchies.

Check out more of the best sim games that you can play right now or, for something a little different, the weirdest simulation games that are about to become your new favourite hobby.