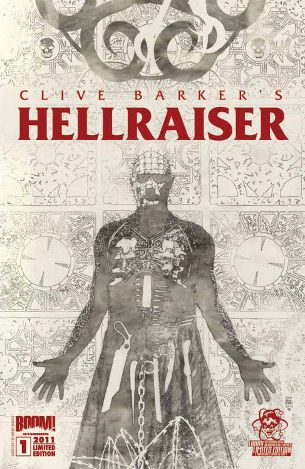 Eight pages of monstrous mutilation, Prelude gave us all a pretty firm indication of what was to come. Namely, ole’ Pinhead at his barbaric best, slinging his hooks around with the wild abandon of a drunken fisherman and generally being a nasty piece of work. Yet for all the flailed flesh and graphic grandstanding, it was the last panel that lingered longest. Considering his reflection in a puddle of gristle and guts left by his latest victim, the Cenobite-in-chief is clearly experiencing some sort of existential funk, and not the Bootsy Collins kind.

All of which leads us to the first instalment proper of the new, on-running Hellraiser series. Since Hellraiser first unleashed Pinhead and his gruesome gang of mutilated mates on unsuspecting cinema-goers in 1987, he’s become an icon. Yet after a slew of films (and with another on the way), where else has one of the most fiendish faces in horror got left to go?

Well, Nebraska seems as good a place to start as any. On an isolated farm in the middle of nowhere, an innocuous looking draining duct beckons us down the rabbit hole and into a sinister underground bunker. A young girl is being held hostage in a room with only the Lament Configuration for company. As the puzzle box opens for her, Pinhead arrives to harvest her soul, but his revulsion at her pleas and his boredom of this now familiar spectacle lead him to return to hell intent on striking a fresh bargain with the powers that be. He wants out, and he’s even lining up his replacement.

The centrepiece of this first issue takes the form of a macabre musical as Pinhead strikes a deal with his master through the power of light organ accompaniment. Speaking to his overlord through the "rotted ivory" of a church organ that has skinless, bloodied corpses for pipes, Pinhead’s disdain for his situation becomes overt, and it’s powerfully played out.

Perhaps the most satisfying aspect of this first issue is the quality of the writing. Barker, aided and abetted by Christopher Monfette, does not disappoint. Pinhead’s contempt and exasperation are beautifully articulated, his frustration at the futility of his position palpable. While some of the detail might be lost on readers who aren't up to speed with the fine details of Hellraiser mythology, the black poetry and tantalising hints at what is to come certainly warrant further reading.

Leonardo Manco’s artwork, which felt slightly rushed in Prelude , is far more assured here. The grimy first panels overlaid with film cells are an effective opener, and he clearly enjoys finding new and inventive ways to torture the damned.

Clive Barker fans will undoubtedly lap up this new series, and rightly so. This first instalment, with the ever-charismatic Pinhead front and centre, has set the tone for what looks to be a gripping first arc that should be well worth the trip to hell and back.