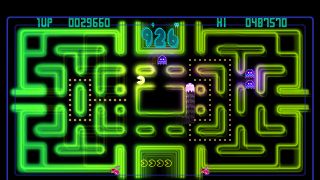 Not every arcade game becomes a cultural icon: for every Pac-Man, there’s a Bosconian. The ones that survive tend to have something special – an idea so influential it creates a genre, like Space Invaders, or a mechanic so perfect that time cannot wither it. Pac-Man’s mechanical twist, and the core that Pac-Man Championship Edition builds upon, is the switch between hunted and hunter.

In the original Pac-Man you control the eponymous quaffer in a fixed maze filled with dots, power pills and four ghosts. As the game proceeds, the maze stays fixed while Pac-Man and the ghosts speed up. Power pills, which make the ghosts edible for a brief period, allow you to turn the tables at the right time. But Pac-Man isn’t just about negotiating a maze and munching down on ghosts, it’s about learning patterns – a delicious twist that has a strategic element beyond simply scoring.

This underlying rhythm is what Pac-Man’s designer, Toru Iwatani, chose to focus on when making Pac-Man CE – an all-singing, all-dancing XBLA remake that would revitalise the venerable classic but stay true to the original. The static layouts and stage progression go out the window, in favour of a morphing maze that reconfigures itself as you play. Dots spawn in patterns whenever Pac-Man gobbles fruit, with the wakka-wakka sound effect layered over a relentless beat. The shifting fluorescent walls pulse in time to the music.

Yet there’s an intriguing strain of minimalism that makes Pac-Man CE, above all, an exercise in refinement. Everything in this game has been included for a reason, from the arcade-inspired bells and bloops that indicate score thresholds or new spawns, to the split-second freeze as Pac-Man swallows a ghost (with increasing scores represented in larger font). And right at the centre of this vibrant nexus are the ghosts that chase Pac-Man, and the classic twist of turning the tables.

Pac-Man CE builds a new structure around this idea, and reimagines or throws out everything that doesn’t fit. Where power pills were strictly limited in the original, here they ebb and swell – at times you’ll have endless power pills to go on a feeding frenzy, at others you’re starved and forced to rely on cunning jukes. The game has several different modes and in some of these your objective seems to be permanent ghost-guzzling. But by far the biggest change is the redesign of the smaller dots. They automatically covered the original maze layout, but here spawn as you play, forming tiny breadcrumb trails around the ever-shifting grids and contours of the labyrinth. These new configurations encourage Pac-Man to make little L-shaped sweeps, great figure-of-eight loops and long laps around the edges at top speed.

The dots in the first Pac-Man did this through elimination, but here the guidance is more explicit. This hints at a deeper change: Pac-Man was an arcade game designed to swallow coins, and Pac-Man CE is a game designed to be enjoyed at home. The original game’s sharply scaling difficulty is abandoned, and though this was lamented by a few, it was replaced with patterns that encourage quick-thinking play while going a little easier on everyone.

Not that Iwatani became a pushover, of course. Linear design like the dot-spawns allows for a greater degree of control over pacing and, in concert with Pac-Man CE’s strict time limit, means the game can quickly build and then maintain a high level of intensity over each play. When you repeat the normal mode’s five-minute gameplay, you begin to see patterns - the wheels within wheels - while the freshly spawning lines encourage you to apply digital blinkers. As you guzzle at an ever-increasing pace, and dance in wilder configurations, you become immersed in simply keeping this mad rhythm going. You can die, sure, but the real fail-state is tripping up and slipping out of the flow.

The switch between running and chasing remains one of the game’s great mechanics, and Pac-Man CE allows it to shine. Iwatani designed just a handful of games across his career, and Pac-Man CE was his final work before retirement. It’s still a high-score game, and it’s something you can get very good at. But in Pac-Man CE’s generous spirit and freewheeling guidelines there’s a sense of fun for fun’s sake, a desire to make players feel good about themselves. And perhaps, too, a little poetry - a creator’s pride in polishing and refining his greatest work for one last time. The original Pac-Man remains a piece of history but, if you just want a good time, Pac-Man CE is as good as it gets.