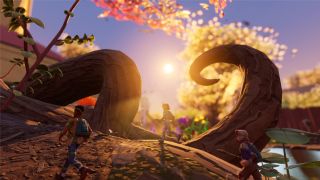 "It's definitely a surprise," game director Adam Brennecke says as we're chatting about the newly-announced Obsidian title, Grounded. When I arrived to get a sneak peek at the latest game from the studio behind The Outer Worlds, I certainly wasn't expecting a survival adventure, let alone one where you play as one of four, nine-millimeter-tall teenagers attempting to navigate the perils of a backyard by crafting, foraging, and building and defending a base. But Grounded has been in the works for a little while, giving Obsidian plenty of time to explore outside of its comfort area.

"We've been wanting to make a survival game for a long team here at the studio," Brennecke points out, "After Pillars of Eternity 2 shipped, we sat down in the office, myself and one of the lead designers, Bobby Null, and we were kind of like 'Okay, if we're starting a survival game today, what setting would we use?' And so we just brainstormed." And through that brainstorm, the team landed on Grounded.

Brennecke describes Grounded as a Metroidvania-like that it'll require you to craft items in order to proceed through the storyline and the gameworld, which will allegedly be "huge," despite being made by a team of only 13. Brennecke doesn't see the team getting any bigger. "I like it small and tight," he says before mentioning that most of the people working on it wear a variety of hats.

So, Grounded is a survival-adventure game that offers first-person, co-op gameplay from a studio that's famous for its RPGs, being made by a baker's dozen of development talent within that studio – it's tough to know what to expect from this game. But that's why we're here.

Honey, they shrunk the kids

Brennecke and team are aware of the references Grounded will elicit (A Bug's Life, Honey I Shrunk the Kids, Antz, The Bee Movie) and openly admit to watching those films during production. "I'm a child of the '80s, so I grew up with [those movies]," he points out. "Trying to fit that into a videogame and see what types of things we could explore as game designers is really cool."

I ask if those movies influenced the creation of the protagonists: four strong-willed teenagers with vibrant and disparate personalities (four person online co-op will be supported, btw). Brennecke is quick to respond: "Yup, yup. If you even go back to the Goonies, for example, that sense of adventure, all the way to Stranger Things more recently, there's the idea of being a kid again and exploring a strange new place. It's still familiar to everyone." The four teens even fit the traditional kids' movie archetypes: there's Max the jokester, Willow your typical grumpy teenage girl, Pete the Boy Scout Nerd, and Hoops the team's sporty leader. While we didn't get a chance to see their personalities – Obsidian hadn't recorded any VO just yet – Brennecke was quick to clarify that they spent a lot of time crafting these characters. "They'll have a voice in the game and their own personality that they'll bring to the table. Typically with Obsidian games we have a banter, so if you're playing a multiplayer game they'll talk to each other and stuff like that."

Grounded captures the childlike wonder felt when discovering a new world and adds the need to adapt to that new world in order to survive. The game opens with the moment you're shrunk down: a robotic voice checks your vitals as you slowly gain a clear view of the vista, which is full of towering blades of grass and bees the size of helicopters. The robot, named Sca.B, continues to speak in scientific jargon as a curious ant approaches, its antenna flicking about to try and identify you. You're instructed to knock a drop of dew off a blade of grass to get water and the dewdrop is too big to fit in your hands. A ladybug is standing nearby, roughly the size of a St. Bernard. In the distance, a juicebox that could be a tractor trailer is lying in the dirt.

As I watched the demo, I was immediately struck by an intense bout of deja vu – Grounded reminded me exactly of an interactive Honey I Shrunk the Kids Movie Set Adventure in Disney World that I had played on as a child. I remembered climbing over the massive obstacles, pretending I had been accidentally shrunk down my brilliant idiot of a father. That feeling lingered throughout the demo – I heard myself gasping at a big spider, marveling at a box of mints, and cooing at an especially cute aphid that skittered past.

Speaking of insects, Grounded is full of them. The backyard is quite literally crawling with spiders, flies, bees, aphids, dust mites, ladybugs, and plenty of creepy-crawlies that we weren't allowed to see (although I did catch a glimpse of a very big praying mantis on their production whiteboard, so enjoy that future nightmare). The insects all display different behaviors, have unique goals, and serve distinctive functions for your survival. You can collect the dust from fallen dust mites and use it to craft clothing. A ladybug can lead you to a food source, while an aphid can become a food source. Walking into a spider web acts like an arachnid doorbell – the big boy will come looking for you almost immediately, and even though Grounded's art style is less realistic and more stylized, the mother-effer is scary.

After the demo, I ask Brennecke if Obsidian has a resident entomologist on the payroll. "Yeah, Wikipedia," he laughs, before clarifying. "Anytime we add a new insect into the game we definitely do our research. We look it up and watch a lot of YouTube videos. There are a lot of enthusiasts that make long featurettes about insects, which is actually pretty fascinating to watch. There's plenty of interesting things that I never knew when starting this project... There's some scientific nature that we don't want to get in the weeds too much on. But we try to keep, at a base level, how insects behave."

According to Brennecke, the game will get harder as the story progresses, and some of the insects will grow more hostile. That's where Grounded's base-defending mechanics will come into play – the structures you build will be repeatedly attacked by a variety of bugs, and you'll have to rebuild walls and craft traps to keep your base safe so you can earn some much-needed shuteye.

With The Outer Worlds (a game that shows off just how well Obsidian can do RPGs) fresh in our minds, I ask Brennecke what aspects of Grounded will remind players that this is a game from the team behind this year's GOTY contender. He's quick and assured in his answer: "You know I've spent my entire career here, so I think I only know how to make Obsidian games. That's in my DNA as a game developer. We're looking at ways of doing our own thing, adding our own unique flavor to it."

Brenncke points out some of Obsidian's best talents that have shone through in their games, like rich storylines that drive you through a big game world, and memorable characters that draw you into the story. "We wanna create memorable characters in this game," he tells me. "That's actually unique to survival games." And like any Obsidian game, Grounded will navigate the notion of how a player affects the game world (how many times did you get caught stealing sh*t in The Outer Worlds? Be honest). "As Obsidian game developers, we look at how the player affects the world," Brennecke points out, "And with our insect life and our ecosystem that we're building and how the simulation is running, the player has a lot of opportunities to change the world by interacting in this environment." Here's hoping you can't be responsible for the extinction of bees, because, yikes.

Brennecke's team is small and will remain that way, likely because he wants to keep the production intimate, tight, and close to him so he can keep tabs on it. But Grounded, as Obsidian's first title as an official Xbox Game Studio, will drop on Xbox Early Access so that those who play the game can give Obsidian (and Brennecke) input that will affect the game's future. "We want to continue to support the game after launch," Brennecke mentions, "And see what features the community wants, and see if we can support adding new features." A petition to ride bugs will be submitted by yours truly.

We've also got the scoop on all of the Xbox One X Black Friday deals.