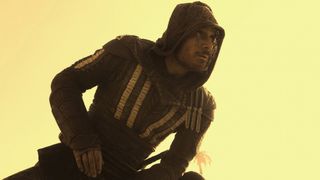 The Assassin's Creed movie release date might have dived into 2017 in the UK but that doesn't mean we have to go without hooded Michael Fassbender action. Revealed by The Playlist these images from Assassin's Creed show off Fassbender in various new poses as both Spanish Inquisition Assassin Aguilar and his modern day descendant Callum Lynch.

First off, interestingly is the below shot. Now this is intriguing for a couple of reasons. On the surface, that looks like Aguilar but that background is definitely the Templar headquarters of Abstergo where Lynch has been undergoing his Animus experiences.

I'm not going to lie. Assassin's Creed takes some serious, errr, liberties with science but what it doesn't do is time travel. This must be Lynch trying on Aguilar's outfit. Given that routine Animus outings have the side effect of the Bleeding Effect where patients start learning their ancestor's skills, I'm willing to bet at least three hidden blades that Lynch is planning on escaping the facility dressed as Aguilar, wrist stabbers and all.

This, on the other hand, is definitely Aguilar in the fifteenth century looking like he's about to get stabby.

The new Animus is now a giant animatronic claw but it looks like there's some complex Abstergo science at work here. This is what it would look like if Templars made Jacuzzis.

Below are some more screens of Aguilar in action. It's worth remembering that we're not actually going to see as much of him as we were expecting. More than half of the movie takes place in the 21st century as Lynch learns about his ancestor.