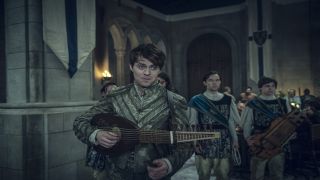 Don't deny it. You've wanted to blast Toss a Coin to Your Witcher, Netflix's The Witcher's ear worm, on repeat on your way to work since the song's debut. Well, now you can, as it just dropped on Spotify.

The announcement from the official Netflix The Witcher account also reveals that we'll get the entire soundtrack on January 24, which will likely include Jaskier's bawdy pub song from episode two, the music he plays in Cintra during Pavetta's banquet, and a bunch of the show's score. I can't wait to drive my roommates nuts with this.

As we previously reported when we spoke to the song's composers, Toss a Coin to Your Witcher underwent some heavy workshopping before it became the song that has entranced us all (there was even a rap version). Once The Witcher dropped on Netflix the song spread like wildfire, with people far more talented than I making techno remixes, metal covers, and more. But until now, you couldn't stream it on Spotify - this meant if I wanted to listen to it on my commute I had to load up the scene on Netflix before heading into a tunnel on the L train. This is far more convenient.

No one will judge you if you've daydreamed about stepping off the platform and onto the train just as Jaskier's voice swells, imploring you to donate some money to your local witcher. Maybe you've considered running on the treadmill as the song builds, pushing yourself a bit further in honor of Geralt's rippling muscles. Maybe you're practicing for the next karaoke night, knowing full well this song would bring down the house. Whatever your use for Geralt's anthem, rest easy knowing it's available now for your streaming (and repeating pleasure).

While writing this piece, I listened to the song nine times. I'm keeping track.

If all this coin tossing has you impatient for The Witcher season 2, we've got all the info you'll need.