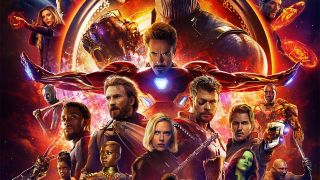 It’s not long until Avengers: Infinity War releases. Just over one day, in fact. That's slightly more than 48 hours until the culmination of 10 years - aka 87 thousand hours - of storytelling in the Marvel Cinematic Universe. Infinity War’s grand, apocalyptic crescendo is going to be a very big deal indeed, but what if you haven’t seen all of the aforementioned decade of super-punching? What if, for some inexplicable reason, you’ve haven't been catching up with the ultimate, one-movie-a-week MCU recap we've been running since the beginning of 2018, and are now panicking that there’s definitely not enough time to watch all 18 films before Infinity War is released? Calm down. We can make this work.

Below you’ll find a carefully curated, delightfully condensed list of the five (and five only) MCU films you need to watch as a primer for Infinity War. Yes, you’ll get a tad more nuance if you’ve watched literally everything, and skipping things means that you might not get every last small reference, but if you fundamentally want to know what’s going on in Infinity War, why, and to who, then these will have you covered. Read on, get clued up, and be entirely ready to bluff your way to expert level on opening night.

Important because: It’s the one that starts everything off

It might seem like I’m skipping a whole lot of stuff by vaulting straight to the first big team-up movie, and I absolutely am. But if we’re cutting away the fat around the core Infinity Stones storyline to leave only the most important narrative meat, then none of the previous films matter.

After a bunch of decidedly terrestrial superhero movies, The Avengers is where the wider, intergalactic threat story of the MCU really kicks off, and also where Thanos’ big purple nose first pokes into Earth’s business. It’s the film that really formalises the would-be conqueror’s interest in the Infinity Stones, by way of Loki’s ‘gems for soldiers’ deal with the Chitauri. As such, it’s also the film that eases audience and heroes alike into the idea that Bonkers Space Danger is going to pose a bigger threat than anything they’ve seen so far in the MCU.

Also, the film’s first and second acts do a great job of establishing the Avengers team while recapping and emphasising their personalities, meaning that it’s pretty much all the shorthand you need to catch up on any of the previous solo movies. For a huge-scale blockbuster, The Avengers is actually a surprisingly dense, character-driven story, but does all the important heavy lifting with deft economy. You can start here and be absolutely fine.

Important because: It sets up the bigger picture and makes Thanos a real character

Next, let’s skip three whole films and two entire years, and jump straight to the heart of the Bonkers Space Danger. Because the first Guardians of the Galaxy is the next point that the Infinity Stone saga really heats up. Most significantly, it’s the first film that really explains what the Stones are, and therefore changes them from being a vaguely ominous background element to a fully-fledged, tangible part of the MCU’s central storytelling. In Guardians, we get the origin and history of the Stones, as well as some clear indication of the level of power they’re actually capable of. And we also get a better impression of how big a deal they are on a cosmic level, far beyond the reaches of Earth.

Beyond that, Thanos himself also becomes a much more concrete entity. Previously only clear to comic book lore experts, the Mad Titan’s background and place within the wider Marvel Universe becomes properly defined in Guardians of the Galaxy. We learn about his actual character, we learn about his relationships - via his daughters, Gamora and Nebula - and heck, he actually get a proper, in-film scene for the first time. It might not take place on Earth, or feature any of the main MCU cast, but Guardians of the Galaxy is one of the most important Infinity saga films of the lot.

Important because: It properly weaves the Infinity Stones into the Earth story

Getting back to Earth, Avengers: Age of Ultron is another major slice of Infinity Stones lore. Loki’s sceptre makes a reappearance, and becomes a major plot element, being the catalyst for Ultron’s creation and an evolving plot thread throughout the film. The relevance? Loki’s sceptre contains the Mind Stone. Another Infinity Stone has become an explicit plot device, and its potency has major and specific repercussions on an MCU story. Only now it’s all kicking off on Earth. Shit, my friends, is now getting decidedly real.

Along the way, the Avengers themselves become far more familiar with, and learned of, the concept of the Infinity Stones (until now their existence and true nature has remained on the periphery of the lead characters’ knowledge), as Thor identifies the Mind Stone via a vision, and the team gets a new member powered by said stone, in the shape of, er, Vision.

Along the way, Scarlet Witch’s telepathic powers feed further into the sense of impending doom, by way of prophetic, nightmare visions for all, and Tony Stark in particular gets a really harrowing, vivid, and very specific view of a dead future in which the Avengers have resolutely failed to save Earth. There is a very strong sense that this hallucination might not relate entirely to the threat posed by Ultron. At the very least, Tony has a greater innate fear of Impending Space Horror than most Avengers, making this an important early telegraph of what’s eventually to come.

And finally, with the various moving parts of the Infinity saga shifting into overt and ominous position, Thanos turns up in another post-credits scene, realising that he can no longer rely on proxy agents to collect the Stones for him, and setting off for Earth himself. And lo, we are at the top of the rollercoaster, and about to tip over the edge.

Important because: It defines all the character dynamics going into Infinity War

Captain America: Civil War (aka. Avengers 2.5) might not include a great deal of Stone-based malarkey, but in setting up the final group characterisation before Infinity War, it’s one of the most important films of the lot. Because Infinity War is going to have to deal with a lot more than Thanos, and Civil War is where all that goes down.

There’s the world’s radically different view of superheroes, by way of the Sokovia Accords. There’s yet more guilt and complex penance for Tony, who by this point has been terrified by his own screw-ups and hang ups so many times as to be a barely disguised bag of neuroses. There’s major development for Cap, who finally has to decide between what’s right on a global scale, and what matters to him personally. There’s a whole lot of messy, unresolved fallout from all of this, which leaves a heck of an interpersonal train-wreck to deal with before the Avengers can even get close to punching anything in Infinity War.

The Avengers going up against Thanos are not remotely the same people they were before Civil War, either individually or as a group. In fact the very idea of a unified group has long-since vapourised, and their new affiliations, motivations, and locations in Infinity War are only going to make sense if you watch Civil War first. Plus, like the first Avengers film, Civil War acts as a great short-hand introduction for new characters Spider-Man and Black Panther - though don't skip either of their films permanently, because they're brilliant.

Important because: It redefines the world Infinity War will play out in, and establishes some potentially major plot devices

To be upfront with a warning before we go on, Doctor Strange is not a great film. It’s not an offensively bad one either, mind. It’s just sort of… there. Expect no more than to be mildly engaged for two hours, and you’ll have a thoroughly adequate time. But at the same time, it is a film that you cannot miss. Because Doctor Strange, although a bit of a non-event in itself, is really important for the bigger picture going into Infinity War.

For starters, it introduces the notion that magic exists in the MCU, and is a major force within the fabric of the world. A lot of worlds, in fact, as Doctor Strange also formalises the MCU’s place as just one universe within the wider Marvel Comics multiverse. Alternate and parallel realities are now very much a thing. As in fact, is time travel, by way of the Time Stone (a major – and named – plot element in Doctor Strange) amplified by Strange’s mystical powers.

Why does all of this matter? Not only does it drastically recontextualise the world in which Infinity War will take place – radically changing the rules and possibilities of how battle with Thanos could play out, as well as the very nature of what ‘saving the world’ means in a scenario where there are infinite different versions of that world – but there’s also a good chance that the events of Doctor Strange will play directly into Infinity War’s conclusion, and the lead-in to Avengers 4.

I won’t spoil the end of the film here, but, if our big Avengers 4 plot theory turns out to be true, then the conclusion of Strange’s solo movie might well directly inform how Infinity War plays out. It all ties together suspiciously well indeed. So yeah, non-life-changing as it might be, you’re going to have to watch Doctor Strange in order to have any sense of the true nature of the MCU as it stands. And, possibly, to make sense of certain major future events if they do occur in Infinity War. Sorry about that.