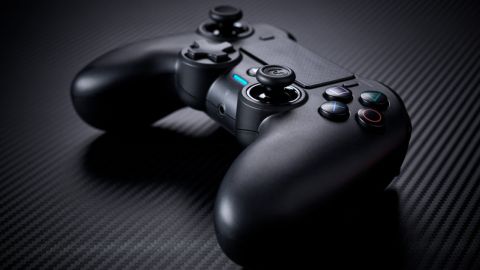 If you’re not a fan of the DualShock 4 thumbsticks, this controller is right up your alley. Otherwise, keep stepping - it's probably isn’t worth it.

In theory and fiction, parallel universes are supposed to be the same as ours except for a few key differences. Perhaps Sony stuck with that hideous boomerang controller on PS3 in one reality. Maybe pizza is never invented in another, thus damning all of humanity to a far less delicious existence. Either way, that’s how Nacon’s Asymmetric Wireless Controller for PS4 and PC feels; it could be mistaken for the DualShock 4 at a glance, but diverges from Sony's handset in crucial (if subtle) ways. The thing is, those differences won't add up to a worthwhile investment for many of us.

Asymmetric thumbsticks aside, this handset sees Nacon doing its best DualShock 4 impression. And it’s not bad. You won’t be fooled, though. Nacon’s version is somewhat plumper, as if a PS4 controller overindulged during the Holiday season. Which isn’t a bad thing, of course. This is one of the more inviting PS4 accessories you'll find. Even the face buttons are chunkier in a friendly sort of way.

Unfortunately, the Asymmetric looks… well, a bit cheaper than I'd like. Although the build-quality is as excellent as ever, it's made of a somewhat dull black plastic. It lacks standard DualShock 4 touches such as grips or a lightbar, too. On the plus side, this means you can get your hands on it for less than £40. Finding a PS4 controller cheap isn’t easy, so affordable alternatives like this are always welcome.

But what does it offer that you can’t get with the standard handset? As you’d expect, asymmetric thumbsticks are the headlining act. If you’re someone who couldn’t get their head around the DualShock 4’s layout, Nacon has your back. While switching the d-pad and left thumbstick may not sound like much, it makes a huge difference in practice if you’re an Xbox user or are new to PlayStation. The bulkier heft of the Asymmetric will be more familiar to Xbox One gamers, too.

Otherwise it’s business as usual. It’s true that we’re lacking a lightbar, motion-sensing, and controller-based audio, but I doubt many of us will miss those features anyway. In fact, the only thing I was left pining for was true Bluetooth connectivity. This controller works via wireless USB dongle on both PS4 and PC, so I had concerns about whether that’d cause a slight input delay.

Luckily, my doubts amounted to nothing. While I’m sure you’d see a millisecond's difference if you dug into the numbers, this controller’s performance seems to match the DualShock 4 on a surface level. If there’s any lag, it’s imperceptible.

Even though it’s a fraction heavier, it’s comfortable to use for long periods of time as well. Indeed, I ended up preferring its chunkier frame; it fit my hands better than PlayStation's official version.

Nacon’s reliable hardware is also on display elsewhere. Those thumbsticks are precise and offer good resistance, much like the triggers (though I wonder whether your fingers would tire as a result of their stiffness). Additionally, there’s a satisfying click to each and every button. It’s just as effective on PC too, not to mention less expensive than the Xbox One equivalent. Oh, and it's dead-easy to connect on both systems. Simply insert the USB dongle and get down to business.

Not there isn’t room for improvement. The Asymmetric’s spongy d-pad is a step down from the DualShock 4's, for example. But this isn’t a deal-breaker. For the most part, Nacon injects its controller with the feel of an Xbox One handset while holding on to what makes the DualShock special.

Of course, the real question is whether you’re bothered enough by those DualShock 4 thumbsticks to try something else. The Asymmetric isn’t much cheaper or ‘better’ than PlayStation's offering, so I’d only advise getting it if you’re not a fan of the latter's setup.

The Asymmetric won’t hold up as a like-for-like replacement of the DualShock 4, but it’s a good choice if you’re not keen on the PlayStation layout; it switches things up without losing what makes the DualShock great in the first place. Affordable and mechanically sound, Nacon’s latest will satisfy those longing for an Xbox-style control scheme on PS4. That said, I'm not sure there's much here for anyone else.

If you’re not a fan of the DualShock 4 thumbsticks, this controller is right up your alley. Otherwise, keep stepping - it's probably isn’t worth it.