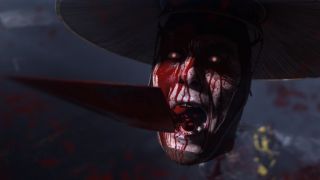 Another surprise reveal from The Game Awards 2018: Mortal Kombat 11 is not only coming, but it's practically just around the corner, with a special community reveal on January 17, and a global launch on April 23. Check out the teaser below:

It's a little hard to know what's going on here if you've missed out on the story from the most recent MK games, but here's a quick rundown: after failing to stop Shao Kahn's takeover of Earth, longtime hero and thunder god Raiden effectively reset the MK timeline - but now certain heroes are dead, others have switched sides, and the original cast's children are now just as powerful as their parents.

With the trailer showing off two Scorpions, one of which is wearing his classic costume, plus the tease at the end with a mysterious woman caressing a giant hourglass, it would seem there are some time travel shenanigans afoot once again. And of course, the fighting looks just as brutal - if not more so - than any previous entry in the franchise.

The next chapter in NetherRealm Studios' bloody, gruesome fighting series will arrive on PC, PS4, Xbox One, and Nintendo Switch. Pre-ordering the game will get you beta access, as well as instant access to Shao Kahn as a playable character.