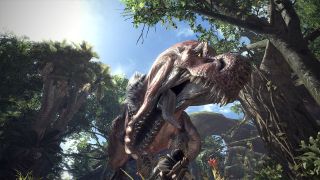 When Capcom announced Monster Hunter World at E3, it was clear this series entry is doing things a bit differently. It’s the first proper console game since Monster Hunter 3 Ultimate 2013 and it’s actually offering you a semi-open world to explore, full of beasties to hunt that exist within a living, breathing ecosystem.

The section of the game I play is set in the same area as the gameplay we’ve seen before with the leathery and feathery beast that is the Anjanath. But this time around I get to tackle two separate missions, one to capture a Great Jagras and another that will see me pulling off an accidentally impressive mounted attack on my very own Anjanath.

Like always, my mission starts with heading to a lady with a list of open quests, packing my bag at my little camp and making sure my fuzzy Palico pal is ready to fight. The similarities don’t stop there of course, but it’s the way Monster Hunter World tweaks and evolves the series’ gameplay tropes that make this feel like Capcom has thought about the game’s wider appeal, now it’s coming to consoles.

For one, it introduces a world that can happily exist without you. There’s an ecosystem here with the beasts and the flora that includes an entire food chain. For a small portion of my preview session, I sit nestled in the long grass watching the scaly critters play out a mini version of a David Attenborough documentary by the watering hole. It really is quite something to admire… from afar.

Of course, you’ll have to get in there eventually because this is called Monster Hunter not Monster Watcher and the combat feels as satisfying as you’d hope. I can use the scenery and world to my advantage, getting higher ground in an attempt to leap onto the beast’s back for a mounted attack or collecting rocks to use as distractions in my little pea shooter. It’s definitely going to take some practice to master how to use the world to your advantage, but even in the preview I somehow leap on the Anjanath’s back and get a load of rocks to fall on its head. It still kills me mind, but for a moment I feel invincible.

There are brilliant smaller tweaks too, such as being able to change armour and weapons from the hunting map, drink potions on the move and having multiple camps to spawn from across the map’s zones. Capcom has recognised the need to make it more accessible to new fans, to make the actions feel more natural and realistic.

It’s just a shame that the world doesn’t look quite as alive as it really is. Playing on PS4, there are a lot of issues with clipping, my prey wandering through the scenery as if it wasn’t even there and the monsters falling into my avatar to the point they look like strange conjoined twins.

And the combat lock doesn’t work that well either, leaving me thrashing and flailing my gigantic axe into the space around the massive beasties rather than into the flesh as you’d hope. Hopefully this is just pre-release teething problems, because it’s going to be a major issue come launch if not.

It’s not as open-world as I’d hoped either. As I play this preview I sneak a peek at the map and it’s more of a hub world split into different zones than a traditional open world. That’s not a bad thing per se, but don’t let the lovely gameplay trailers convince you that you’re going to be exploring this big Jurassic world. It seems like it’s more of a Jurassic Park with set boundaries and walls, where you’ll learn the lay of the land as you explore and work out how best to tackle each quest by knowing each section of the map.

The scout flies almost make the world feel more linear too. These glowing little bugs gain strength the more clues you pick up on the monster’s trail, whether that’s mucus slicked across a rock or footprints left in the mud. They help lead you to where the beast is lurking, but almost blind you to what’s around you - at least that’s what it was like against the clock in the section I play.

But for me it’s the Palico who absolutely steals the show in this Monster Hunter World preview. Animals generally make a game great, but there are some lovely little touches even in the 30 minutes I get to play here. On the trail to take out the Great Jagras, we meet a gaggle of regular Jagras and for some (amazing) reason I turn around to see my Palico riding one of them. It’s not quite clear what taming powers the Palico has, but seeing a cat riding a lizard is one of those viral Facebook videos waiting to happen.

And then, the dinghy. OMG the dinghy. I didn’t think a Palico could get any cuter, but wander towards any body of water and the little fella jumps into a rubber ring and paddles himself across it with an oar. I think a piece of my heart melted.

It’s the little things like this that make Monster Hunter World feel different to the games we’ve had before. Sadly, if the graphical quality doesn’t improve in the next six months, and some of the glitches aren’t cleared up, Monster Hunter World is going to pale in comparison to games like Horizon Zero Dawn. We’ll see what happens when the game launches in early 2018.