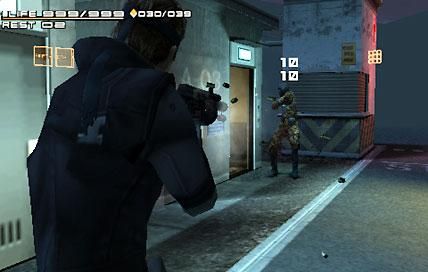 Metal Gear typically conjures up visions of advanced graphics, intricate storylines and stealthy action. But to bring the series to the PSP Konami has jettisoned most of the graphics, some of the stealth and simplified the story...kinda. Metal Gear Acid is, of all things, a turn based strategy card game. And yet it's also the deepest, most complex and difficult game on the PSP. That's not always good.

As unlikely as the card-based strategy are the murderous dolls that drive the plot. After hijacking a plane carrying a presidential candidate, they demand delivery of Pythagoras, a device currently held in a jungle weapons lab. Too bad the location has been captured by an unknown mercenary corps, Solid Snake and a SWAT agent named Teliko have to infiltrate the base, grab Pythagoras and learn all sorts of uncomfortable truths.

Acid features that classic video game duality: good plot, awful dialogue. We're tempted to advise skipping through the text-only dialogue as fast as possible, but there are occasional bits of useful info buried in there. Hope you can speed read; it'll ease the pain.

Acid's card system seems outrageously complicated at first, largely because some of the bad dialogue conceals skimpy gameplay instructions. The basics are obvious; any action requires playing a card. Snake's deck is small at first, but cards can be purchased between missions, and over time he'll have loads of endlessly configurable options.