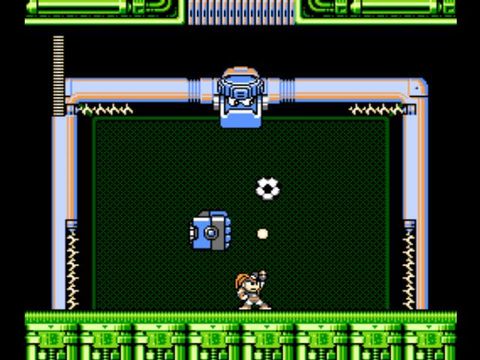 Producing Mega Man 9 with the style and production values of the original ’80s NES games was such a successful stroke of genius for Capcom that it’s no surprise to see the game followed swiftly by a sequel in much the same vein. While it would no doubt be easy enough to rehash some of the earlier games with spruced-up graphics and widescreen support, it’s probably much more fun for the designers to roll back the years and pretend they’re squeezing their code onto tiny 8-bit NES cartridges once again.

We can imagine them sketching out levels on graph paper and cackling among themselves as they erase the edges of platforms until they’re just far enough apart to require a pixel-perfect jump. And that’s exactly what you get in Mega Man 10. There are eight levels, which can be tackled in any order you like, and there are no concessions to modernity. You can forget all about recharging health bars, frequent checkpoints and generous collision detection. Mega Man 10 is simply brutal.

Below every disappearing platform lies a pit of spikes. Tucked in every corner, guarding every powerup, there’s a horrible enemy that spews bullets or lobs bouncing bombs. There’s no respite, and our hero is armed only with a puny blaster. He jumps like he’s wearing a deep sea diving suit. While the game didn’t make us weep like Capcom’s publicity guy warned us it would, it certainly tested our patience. There’s a good reason no other major company makes games like this anymore, and it has something to do with our not-unreasonable expectation, as modern gamers, of seeing at least the majority of the product we’ve paid for.

However, if it’s a sense of achievement that you’re after, finishing a level in Mega Man 10 delivers it like few easier titles can. Pummel the boss, complete an eighth of the game, and you’ll have self-satisfaction beyond belief – plus you’ll have earned the right to attempt the level in Hard mode. No thanks.

For those who really get into the Mega Man 10 groove, there are loads of ‘mini’ challenges, such as completing the whole game on a single life. Once you’ve mastered the levels, there’s a time attack mode and online leaderboards to aim for. There’s as much content as there is in any other Mega Man game.

And for the rest of us there’s the shameful Easy mode, which basically plasters bubble wrap over everything in the game to stop you hurting yourself. Choose this option and it probably gets flagged up at Capcom HQ, so the level designers can shake their heads and pity you while they plot how to hurt you even worse in Mega Man 11. Looking forward to it.