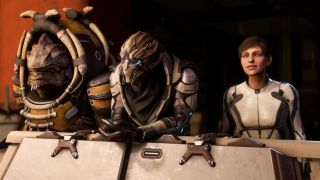 Mass Effect: Andromeda may be leaving behind the Milky Way and Paragon / Renegade system, but not everything from the original trilogy is being tossed out the airlock. In fact, Mass Effect 2's loyalty missions will be making a return in the next chapter of BioWare's space epic, as creative director Mac Walters recently explained to Official Xbox Magazine.

First, Walters explained why the loyalty missions weren't a part of Mass Effect 3: "In ME3 our goal was to bring back everybody who was a squad member ever, assuming that they were alive in your playthrough," Walters said. "To then wrap a mission around each one of those was just a no-go. It also didn’t feel like it meshed with the overall context of a galaxy at war. In ME3, it was that fighting of 'Hey, the Reapers are here, can you help me go deal with my dad?' It just didn’t really make sense."

Walters said Andromeda's loyalty missions are there to introduce you to the new cast and help you bond with them. "To me, the story is always important, but really without the characters, it all just falls flat. It’s what’s going on with those characters that matters," Walters said.

Without the narrative context of building up a team willing to go on a suicide mission, Andromeda's loyalty missions will take on a different tone. "It’s less about conflict and more about getting to know the characters and their reasons for why they came to Andromeda, and what they hoped to find. And building more into the whole story of establishing a new home for humanity."

Read more about Mass Effect: Andromeda and the future of BioWare in the latest issue of Official Xbox Magazine, on sale now. Buy future issues here.