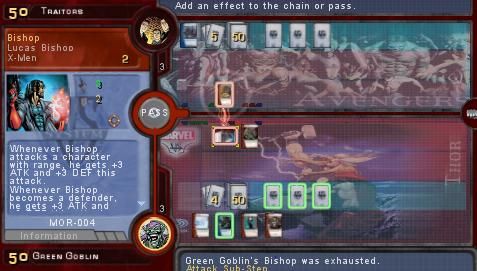 Few current X-men fans realize it, but their super-strong southern sweetheart Rogue was originally introduced as a villain. Indeed, she kicked the costumed crap out of the Avengers - particularly Ms Marvel, whose powers she stole permanently - in her first adventure. Over time, she became the champion of justice comic fans know and love today, but the gloves she must wear still keep her from truly touching another person.

This poignant little comic history lesson is important because if Rogue was a video game, she would be Marvel Trading Card. It's starts off beating you senseless, then makes you fall in love with it over time, but still has a few unavoidable handicaps that keep you slightly distant.

If you've played the original card game upon which this video game version is meticulously based, you'll have no trouble adapting - though it's a stretch to squish everything needed onto the PSP screen, this is a meticulous recreation. There are even robust multiplayer features ranging from ad hoc head to head action to full online tournaments.

If you aren't familiar with the source, get ready for a very steep learning curve. There are character cards, which do the actual "fighting" each round based upon their attack and defense ratings. There are location and equipment cards that give various bonuses (for instance, giving the Thing a gun enables him to attack from the back row instead of just the front). And there are "plot twist" cards, that blow hung holes in any detailed strategy. For example, Spider Senses will boost certain character cards' defense by three points for one round.