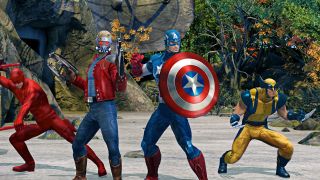 Marvel-branded beat-'em-ups have generated countless fond memories for console gamers. There's the beloved multiplayer brawling of the Marvel: Ultimate Alliance series, which spun off of the equally excellent X-Men Legends games. The PS3 and Xbox 360 ports of X-Men: The Arcade Game delighted many before they were unceremoniously delisted. Hell, even thinking about War of the Gems on SNES brings a nostalgic twinkle to my eye, despite its brutal difficulty. If you're keen on reliving those glory days, or you're just an action RPG fan in general, you'll be happy to know that the multiplayer focused, top-down brawler Marvel Heroes Omega is headed to PS4 and Xbox One for the price of free.

You might've heard about Marvel Heroes before, as it's been steadily gaining momentum ever since its debut on PC back in 2013. This isometric action RPG is essentially Diablo by way of the Marvel universe, featuring iconic heroes and villains in place of angels and demons. All the modern fan favorites are here - Spider-Man, Wolverine, Captain America, Ms. Marvel, Deadpool, the Hulk - to fight their way through legions of rank-and-file henchmen, Doom Bots, and superpowered bosses in the pursuit of sweet loot (which runs the color-coded rarity gamut and pings to the ground in a familiar, perfectly Pavlovian way). Though it's not a one-to-one port of everything and everyone currently available in the PC version, Marvel Heroes Omega will launch with a solid 38 heroes to choose from. Up to five players online can team up to clear sprawling maps full of evildoers via a flurry of fists, bullets, lasers, and every other offensive ability you can imagine in the Marvel pantheon.

If you dipped into Marvel Heroes back in the day, you might assume the console port is a known quantity - but Marvel Heroes Omega reflects months and months of balance changes, graphical updates, and overall refinements to the core game. The campaign plotline is still very much the same, penned by prolific comic writer Brian Michael Bendis: you'll take the fight to Dr. Doom and Loki to wrestle back control of the Cosmic Cube across a variety of recognizable environments, all plucked from the many corners of the Marvel universe. After you've played through the story, there's still plenty of end-game character progression to strive for, with Danger Room runs and scaleable difficulties. When it comes to game mechanics, though, Marvel Heroes Omega has come a ridiculous long way since the original launch version.

The most noticeable shift is a complete overhaul for how your build your character, with ability consolidation for every hero in the game. The previous system of Power points you'd allocate after every level-up was reminiscent of Diablo 2's skill trees, where many iconic powers were gated behind character progression. The thought of using your precious Power points to create hyper-specialized builds for your chosen hero sounded appealing, but it wasn't so satisfying in practice. "It created this false choice where people felt like they were really getting this chance to build out their build diversity... but that was actually sub-optimal," says Anthony Gallegos, a game designer on MHO. "The optimal way to play was always 'max out eight powers'."

And so, refocusing on everyone's eight best powers became the baseline. The Diablo 2 skill tree was swapped out for Talents similar to those in World of Warcraft: lateral upgrades to your core abilities that still let you personalize your hero's playstyle without being restricted to any one prescripted build. Having a set of eight powers is also much more manageable than multiple bars covered in critical hotkeys, and works perfectly on a controller: your abilities are mapped to the four face buttons, and you switch between sets by holding down L2/LT. The handling on a controller feels as smooth and comfortable as the beat-'em-ups of yore, without any of the finger strain from furiously mouse-clicking you might get after a marathon session on PC.

Marvel Heroes Omega also boasts something you won't find in the PC version: drop-in local co-op. Though many of the same heroes are selectable here, you unfortunately won't be able to perfectly recreate those local four-player Ultimate Alliance sessions; MHO is capped to two players in couch co-op with a shared inventory space so as not to clutter the HUD into oblivion. But being able to pop in a co-op buddy anytime is great, and there'll be no shortage of heroes to try out: every character in the game can be played for free up to level 10, at which point you have the option to unlock them via in-game or real currency. MHO won't carry over account unlocks or progression from the PC version, but it's also quite generous with its ever-growing roster. The main source of MHO's microtransaction money is made through every hero's wide selection of skins, which are all lovingly based on alternate outfits, transformations, or entirely different characters from throughout Marvel's massive bank of comics, cartoons, and Netflix shows.

If you're a Marvel fan with an affinity for mashing buttons to beat up droves of baddies, downloading Marvel Heroes Omega will be a no-brainer. And for anyone who wistfully reminisces about all those fun times in Marvel: Ultimate Alliance - but have no intention on shelling out $60 for a bundle of barely 'remastered' versions - then you ought to check out MHO with no money down. If you're eager to jump in ASAP, the PS4 closed beta kicks off today and runs until May 15th; you can buy into it now with permanent character unlock packs from a range of price points. Otherwise, Marvel Heroes Omega is set to launch later this year on PS4 and Xbox One.