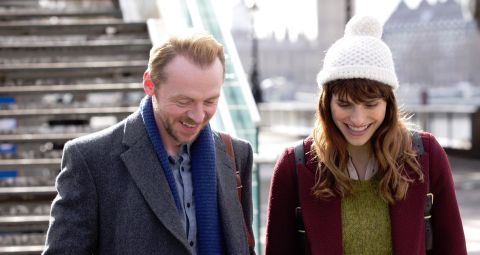 Not up there with key US influences Annie Hall, When Harry Met Sally and Jerry Maguire, but a romcom Brits can be proud of. Make a date of it.

When Jack met Jessica. Or rather Nancy...

Four Weddings And A Funeral, Bridget Jones’s Diary, er… For whatever reason, Brits don’t do romantic comedies too often or too well, especially if you remove Richard Curtis and Hugh Grant from the equation. Which makes Man Up all the more welcome.

With heart, laughs and honesty in abundance, its writer, Tess Morris, clearly knows and loves the genre. This last is important: highlighting the rules and clichés of your tale is one thing; it’s quite another to do so without disappearing up your own smart arse.

The set-up is pure romcom: fortysomething Jack (Simon Pegg) goes on a blind date with thirtysomething Nancy (Lake Bell), only he doesn’t know that she’s Nancy, or in her 30s, because he thinks that she’s Jessica (Ophelia Lovibond), in her 20s, who Nancy’s just met on the train before impulsively stealing her date. The mismatched duo hits the town to have a ball that gets screwier as the night goes on…

Directed with unostentatious pep by Ben Palmer (The Inbetweeners Movie), much of Man Up is a guy and a gal, walking and talking – or, in the case of a stand-out scene set in a Mexican cantina, screaming, dancing and damn near wrecking the joint.

Their chemistry fizzes, with Pegg looser than we’ve previously seen him and Bell nailing a lovable goof with deeper dimensions than many of the kooks written by men. What good are repartee, farce and pratfalls without pain, vulnerability and strength to ground them?

With Morris freely confessing that Man Up is comprised of her own dating experiences married to her unashamed love of a good romcom to snuggle up to, the keyword here is commitment. If you like it, put a ring of truth on it.

Not up there with key US influences Annie Hall, When Harry Met Sally and Jerry Maguire, but a romcom Brits can be proud of. Make a date of it.