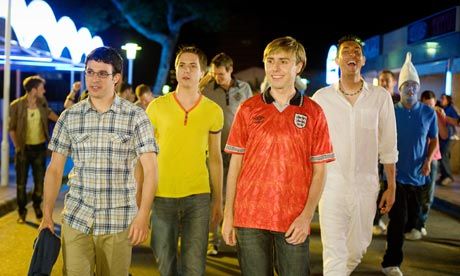 The lads go on holiday but the laughs stay at home in this disappointing postscript to E4’s mint teen comedy, a hastily assembled spin-off with little of the flair and wit of its small-screen predecessor.

In transplanting geeky Will, soppy Simon, vulgar Jay and dopey Neil from their suburban schoolyard to the Cretan resort of Malia, director Ben Palmer proves a change of scene is not necessarily as good as a rest.

Nor does it bring out the best in co-writers Iain Morris and Damon Beesley, whose knob, poo and vomit gags smack more of desperation this time around than the exquisite social embarrassment the TV show mined so successfully.

Starting on its heroes’ last day at Rudge Park Comprehensive, The Inbetweeners Movie wastes no time packing them off on a vacation Jay (James Buckley) promises will be full of “sex, minge, fanny and booze”.

The reality, of course, is rather different: a dilapidated timeshare, lifeless clubs and, apart from the grannies throwing themselves at Neil (Blake Harrison), a distinct lack of clunge. It doesn’t help that Simon (Joe Thomas) is hung up on an ex, or that Will (Simon Bird) is more interested in surveying ruins than popping his cherry.

Small wonder they’re soon at each other’s throats, endangering not just their admission into a super-cool boat party but also their chances of copping off with the four vivacious fillies Palmer generously throws their way.

If anyone deserves praise here, it’s the actresses (Laura Haddock, Jessica Knappet, Lydia Rose Bewley and Tamla Kari) obliged to find these morons attractive, a task made all the harder by the stream of misogynist invective that flows from Buckley’s potty mouth.

Yet the real insult is the way Morris and Beesley try to redeem and rehabilitate their gormless foursome in time for a happy fade-out, one that’s wholly incompatible with their sitcom’s warts-and-all approach to the agonies of adolescence. Ball slaps all round.