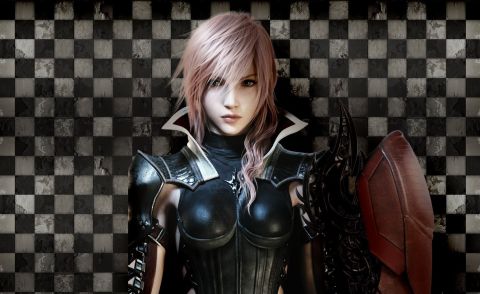 The awesome premise: I'm Lightning, God's chosen savior, sent forth to a dying world. My job is to save the souls of the doomed so they can be reborn when the planet is made anew. The not-so-awesome reality: I'm Lightning, wearing a bikini because it gives me +10 strength. My job is to help save the souls of the doomed, but in practice that means helping some kid find his lost rubber ball, which is located somewhere in a sizable city. In return, I get his soul and a marginal HP increase, which I desperately need because the boss at the end of the quest hub is kicking my ass. Repeat this for 30 hours and you have the basic gist of how Lightning Returns: Final Fantasy XIII plays. The end result is an experience that fluctuates between somewhat enjoyable and frustratingly tedious, and it's more often the latter than the former.

Lightning Returns' primary issue is that its structure just isn't fun. It works like this: An in-game clock counts down toward the world's end; for every quest you complete, you save a soul. Gather enough souls, and you add an extra day to the clock, up to a maximum of 13. Problem is, while some of these quests are entertaining, most are mundane and outright silly in light of the dire situation Lightning faces. At first you'll be eager to save the souls of citizens in need--until you find out doing so usually means finding a trinket they conveniently dropped in a back alley full of monsters. When a little girl asks you to find her missing doll, you'll a) wonder why the world's savior would waste time on such a trivial task, and b) lose precious hours fruitlessly searching for the damn thing (which, by the way, is hidden on top of a random crate on the other end of the city). The structure of progression becomes a counterintuitive cycle: burn time completing fetch quests to get more time to burn completing fetch quests.

Ignoring these quests isn't an option, either, because completing them is the only way to increase Lightning's hit points and combat stats--a necessary step to get through the main story. There's no traditional leveling up; all you get for defeating monsters is cash and items. That's fine when you're hunting those items for quests, but I was more inclined to avoid most battles when I knew the only gains to be made were a handful of pennies and monster pelts that sell for next to nothing.

To its credit, Lightning Returns at least gives you a fairly large world to explore and a genuinely compelling main storyline. The narrative explores interesting religious themes, and its premise is surprisingly dark in a way that makes you want to care about what's going on. Your journey to see it through will lead you to each of Lightning Returns' four large quest hubs, which range from bustling cities to lush forests to sandy deserts. This is by no means a linear game; you can travel between the zones freely, and choose to tackle their main quest components in whichever order you like. The flexibility is great, especially when you get stuck on quests in one of the zones and decide to try your luck in another.

A resource called Energy Points, or EP, is extremely useful during your journey. You can use EP to heal, temporarily freeze the ever-ticking clock, or initiate Overclock mode during battle, which allows you to unload tons of damage without using up an ATB gauge. Though EP is slowly replenished by winning fights, it's a limited resource, so you'll have to think a lot about how best to use it.

But even though the story and non-linear world are initially pleasant, each have elements that work directly against them and diminish their impact. Take the large quest hubs, for example. Spend some time exploring, and they all start to feel pretty empty save for wholly uninteresting NPCs. And the story? You'll run into a few familiar faces from the previous XIII games, but their inclusion sometimes feels more like a ham-fisted attempt at fan-service than a critical plot element. Even Lightning herself is a bit off-putting because she's indifferent toward her situation. Caring about her mission is pretty tough when she says on numerous occasions that she doesn't give a shit about it either--I'm paraphrasing here, but even when I was intrigued by the narrative, Lightning was vocally disinterested. Apathy is contagious.

This dynamic of "oh this part of the game is great...except for...ugh" also plays out in Lightning Returns' combat system. As the only playable character, Lightning has access to three different load-outs called schemas, each with its own active time battle gauge. You might have one setup for physical attacks, another for magic damage, and the third for debuffing--there's a lot of depth in customizing what each of them do, and min-maxing stats and abilities to squeeze the most out of your load-outs becomes an addictive process all its own. The flow of the game's best battles is engaging and chaotically fun; you'll burn through one ATB gauge, swap to the next schema to let the spent one recharge, actively block incoming attacks, and juggle the resources you have left to finish the fight.

But that's the ideal scenario. More likely than not, you'll find that the easier encounters are finished quickly via button mashing, while the more complicated ones--primarily boss fights--are absurdly difficult in comparison. Most battles, even ones with regular monsters, fall on one end of the spectrum or the other, and very rarely do they strike that perfect balance.

Then there's Lightning Returns' odd emphasis on playing dress up. In addition to tons of cosmetic adornments (like a plastic Halloween mask imitating the face of Lightning's dead sister), you'll obtain dozens of outfits during your play-through. These are actually pretty important, as they determine the base stats and abilities of your schemata. Which is to say, you have to equip different outfits every now and then--and dear God are some of those options bizarre. Here I am, the savior of the world, and I'm wearing a bikini, or an ultra short miniskirt, or a weird sexy devil costume--not because omg Lightning's hawt, but because these outfits have beneficial stat increases tied to them. It's perhaps a minor quibble that some are garish, but again this illustrates just how out of touch the game's structure is with its premise.

Lightning Returns has a lot of really fascinating ideas--its story is actually quite interesting, its combat system is often engaging and has a lot of depth, and even some of the game's sillier moments end up being oddly charming. But, while it's not a bad game, its structure is ultimately too tedious for its strengths to prevail. Fun and adventure are slowly drowned out by the necessity of grinding fetch quests under the stress of an always counting clock. It's a shame considering the game's conclusion is a fitting one for the XIII trilogy. Lightning Returns, indeed--I just wish her final farewell wasn't so dull.

This game was reviewed on PS3.