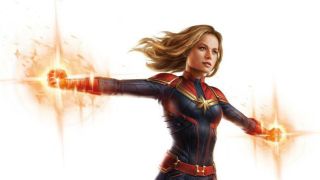 Any day we get a sneak peek at leaked Avengers: Endgame art is a good day. Would you look at that: today is a good day. That’s because recent suspiciously high-res images have made their way online that are either the best fan mock-ups I’ve ever seen or something official that’s slipped through the cracks. Either way, we’ve got Captain Marvel’s powers on display, an interesting Hulk costume, and Steve Rogers being non-committal with his facial fuzz.

The news comes via MCU Cosmic who has spotted a quartet of images that have been uploaded to the MCU Fandom Wikia. We, of course, should take the leaked Avengers 4 art with a grain of salt - but maybe only a Quantum Realm-sized one because as the site points out, the art not only shares a striking resemblance to previously-leaked concept art, but also looks too damn fine not to be real.

There’s Ms. Danvers herself, Captain Marvel. The previous Captain Marvel images have shown her in the trademark suit, but not like this: here she’s getting ready to (hopefully) kick some Mad Titan butt.

About this Hulk costume. Personally? Not a fan. It looks a bit goofy but, hey, I’ll bet Tony Stark will make some jokes about it, too.

Then we see Rocket looking particularly fired up. Losing every member of the Guardians of the Galaxy has made this trash panda turn feral.

Iron Man’s just… Iron Man. No real changes from his last appearance but, man, I bet he looks pissed under that suit.

Thor, meanwhile, hasn’t changed from Avengers: Infinity War - which is interesting in and of itself. The God of Thunder is keeping the eye he procured from Rocket, and he’s still got Stormbreaker in tow.

Finally, good ol’ Cap. Spoiler: he’s shaved off his beard, which is a big no-no in my book. But at least he’s going to be a bit more centre stage this time around compared to Infinity War.

What do you make of the new Avengers 4 looks? Sound off down below!

We're getting closer and closer to finding out what happens in the Avengers: Endgame ending - so be sure to see what the cast has to say about it.