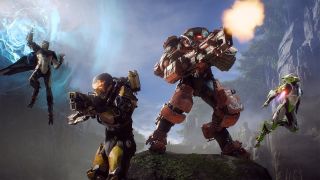 "After eight amazing years at BioWare I have made the decision to move on and have accepted an exciting opportunity at another gaming company," he said on Twitter. "Since the first time I played Baldur's Gate many many years ago, BioWare was the dream place I always wanted to work.

"I will forever be grateful to all the people who gave me the chance to work on great products with amazing people. I believe Anthem has a bright future - there is a great team working on it and I look forward to following its progress (and playing it!) from the sidelines.

"I have really enjoyed interacting with the Anthem community - Streams, Twitter and Reddit. Through the good times and the tough times. You all are in great hands with [EA global lead Jesse Anderson] and [EA / Bioware global community lead Andrew Johnson]. I wish nothing but the best for all of you."

Irving's departure comes at a decisive moment for Anthem. After a rough launch and an even rougher follow-up plagued by delays and repeated setbacks, the most recent Anthem patch notes outlined the long-awaited Cataclysm, not to mention a suite of Javelin upgrades. It's not without issues, and the Cataclysm itself is a bit underwhelming, but the most recent update has been met with fairly positive reception in large part thanks to Grandmaster difficulty nerfs and more plentiful high-end loot.

Anthem isn’t dead in the water and a single departure won't change that, but a disconcerting pattern is starting to emerge among the game's higher-ups. With its roadmap pushed back to who-knows-when and its leadership steadily moving onto greener pastures, BioWare and EA could stand to discuss Anthem's immediate and long-term future.

Irving's departure is unrelated, but internal shifts at BioWare suggest the studio is doubling down on Dragon Age 4.