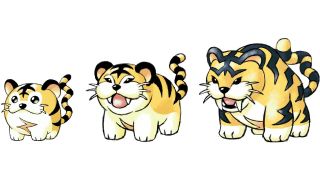 YouTuber Dr. Lava, PokeTuber has been doing the good work of uncovering precious media from scrapped Pokemon concept characters and sharing them to his Twitter account. One of his most recent posts revealed the so-cute-how-dare-they-scrap-it Kotora family, a trio of utterly cuddleable Electric-type tigers, and now we're just waiting for the fan petitions to bring the Kotora Pokemon into canon.

Lost Pokemon of the Day: the Kotora familyCut from both Generations 1 and 2, the Kotora line was a three-stage family of Electric tigers -- as well as probably being the series' most beloved lost Pokemon family.(Photo descriptions & more info continued in thread below) (1/6) pic.twitter.com/tVGn5eTsoiAugust 11, 2019

Kotora, which translates to "baby tiger," and its first evolved form, Raitora ("thunder tiger"), were introduced with the Spaceworld demo of Pokemon Gold & Silver in 1997. It wasn't until recently that the third evolved form was leaked with only a back sprite, evolution data, and ID number, leaving concept artist Rachel Briggs to render the speculative artwork of the third form's front side seen in Dr. Lava's Twitter posts.

Kotora and Raitora's gen-2 planned movesets were also included in the Twitter thread, which include Thundershock, Roar, Leer, and my personal favorite: Scary Face. No offense to the Kotora family, but there is absolutely nothing scary about your adorable tiger faces.

Unfortunately, the Kotora family's chances of being introduced as canon seem relatively slim, with no official announcement, leak, or even tease from the developers that might suggest otherwise. Still, that won't stop us from fantasizing about Game Freak dropping a last-minute announcement introducing Kotora to Pokemon Sword and Shield. After all, the skunk-ish Gene Simmons lookalike Obstagoon was just revealed, so we see no acceptable reason to exclude the far cuter Kotora.

We compiled a handy list of every Gen 8 Pokemon coming to the Pokemon Sword and Shield Pokedex.