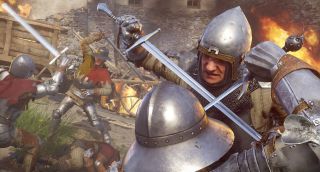 Kingdom Come: Deliverance is a glorious, complicated, wonderful mess. It’s equal parts glitchy and beautiful, but above all else it’s surprisingly deep and complex in ways I never anticipated when I first dove in. There is a LOT here to learn, and it can be hugely intimidating for the opening hours if you don't have a guide. So, if you feel a bit lost or fumbling at first, fear not, you’re in good company, and I’ve cobbled together a list of hot tips that will keep you upright in the saddle and swilling schnapps with the best of Bohemia. If you're getting really frustrated, PC players can fix some of the game's oddest gameplay quirks – like the save system – with our guide to the best Kingdom Come: Deliverance mods.

Cheat the save system

This one might be a bit controversial, but the default save system in this game is absolutely crippling, so if you’re on PC and don’t mind a bit of modification magic, grab the hack that circumvents the reliance on Saviour Schnapps (or finding a bed) to save your game. While I understand the developer’s desire to make the game as immersive and realistic as possible, there’s nothing immersive about losing an hour of your progress because you haven’t found an inn and the game suddenly decided to crash to desktop. Whether you exploit your new found power for save-scumming naughtiness is your own business, but I’d recommend a light touch if you value experiencing the game the way it was designed to be played.

If, on the other hand, you’re playing on console or can’t conscience going outside the game’s intended technical boundaries, make sure you get your hands on as much Saviour Schnapps (the game’s stand in for a quick save feature) as possible. While it’s extremely costly to buy, you can craft if you’ve got the recipe. While learning to read in the game is a bit laborious, you can craft something without having explicitly read a recipe in game if you know what to do.

For Saviour Schnapps, take wine, Belladonna, and nettles to an alchemy bench. Slosh some wine into the cauldron, then a handful of nettles, then pump the bellows six times. After the mixture has boiled for two turns of the hourglass, throw in two portions of ground Belladonna, pump the bellows thrice more, and boil for another turn of the hourglass. And there you have it, just chug the disgusting result any time you’re about to make a bad decision or need a quick escape from the haunting emptiness of this cold, cruel, apathetic universe.

A horse of course

Speaking of staying upright in the saddle, one of the things you’ll want to do as soon as you're able is get your hands on a sturdy mount. Not only can you name them and form a deep, lasting, emotional bond, the sort of companionship that will last you a lifetime (which in the 15th century may run upwards of two whole decades), but they’re incredibly handy for exploring Kingdom Come’s massive medieval world. You won’t be able to get your hands on one until a few hours into the game but when the opportunity arises, jump on it - the bump in movement speed will make your life significantly easier.

While not as punishing as the stamina mechanics in some games, you do need to keep an eye on yours during combat or you’ll end up getting flattened. But it’s not just your stamina you should monitor. If you pay attention to when your foes have been exhausting theirs, you’ll find valuable openings to truly lay into them with your best combos.

Think outside the box

The upside of Kingdom Come’s complicated, living world is that there are multiple solutions to most of the quests in the game. Need to convince a surly lout to pay you the money he owes? You can sweet talk it out of him, pick his pocket and grab the money directly, slip into his house at night and steal his stuff to make up the difference, or recruit a gang of your rough and tumble pals to beat the cash out of him. The game not only allows you to find your own solutions to problems, it actively encourages you to with its multitude of non-combat perks and abilities.

But also think about what’s inside the box

Some of the best gear in Kingdom Come is hidden in locked chests, so you’ll want to learn the lockpicking skill as soon as possible, and hoard lockpicks when you find them (they’re a fairly rare commodity). You’ll have to wait until you make it to Rattay before you can learn to crack locks, but it’s well worth the investment when you do. As soon as you can, have a chat with Theresa’s uncle Miller, who will impart to you his thieving ways and put you on the path to ill-begotten loot and the eventual realization that you can’t, in fact, silence a guilty conscience, no matter how much wine and gold you drown it in.

While modern games have conditioned us to expect leniency where punctuality is concerned, Kingdom Come makes a point of rewarding the timely (and punishing the tardy). If you make a commitment to seek out a person at a given time or join a guard for a patrol in the afternoon, you’re best served to be there on time, or you may take a hit to your reputation, or miss out on a quest or a reward entirely. While the game isn’t generally overly punishing about it, being on time will occasionally net a tasty reward.

Kingdom Come: Deliverance is a slow starter. The opening area takes its time to introduce you to new systems and the setting, which can border on the tedious at times. Similarly, the first time you experience the game’s combat, it will likely feel clumsy and unmanageable. But this is (in part, at least) likely intentional. Your character Henry is a blacksmith’s son, not a seasoned soldier, and the first time you swing a sword in the game feels like the first time he’s ever swung one in his life. But hang in there. Soon enough, the game opens up, and the real open world is revealed, letting you off the prologue’s leash to explore and discover. And the combat improves steadily as not only Henry levels up and becomes increasingly proficient, but you as the player get a better handle on how it works and how best to approach every conflict.

You are what you eat

As a bit of a momma’s boy (you literally heal your injuries early in the game by running home to mother and letting her patch you up), Henry needs a bit of pampering. As such, feeding him well is an important part of ensuring you’re in top shape when you’re on the nasty end of a longsword, so keep an eye on your hunger level and try to maintain a diet that’s not purely garbage. Overeat and you’ll find yourself saddled with a status condition that reduces your effectiveness, but on the other hand, if you eat well and avoid being either hungry or overfed for a number of days, you’ll get a helpful little bonus perk that improves your vitality and agility.

Improve by leaps and bounds

Finally, don’t be ashamed to fall back into those old habits you may have developed playing Bethesda games of yore, where constantly jumping and running meant a steady stream of stat increases. Constantly running and jumping is a great way to spike your vitality early on, so make like a merry man and prance. Your ripped calves with thank you.

No, it's not just you – check out these amazing player tales of spectacular mess ups from the early hours of Kingdom Come: Deliverance.