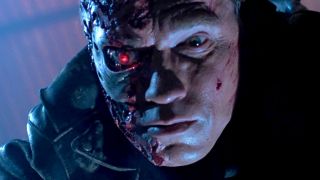 The script for Terminator 2 stated that the end of the world as we know it would come about on 29 August 1997. Were you to ask Mario Kassar and Peter Hoffman for their prediction in the early part of 1991, they may well have told you to bring it forward six years.

Kassar and Hoffman were movie execs at Carolco Pictures. One year earlier the upstart production company had been flying high – throwing a party at the Cannes festival with Arnold Schwarzenegger, Sylvester Stallone, Clint Eastwood, Oliver Stone, and James Cameron (among others) that was so opulent that it is still talked about today. Carolco’s previous blockbuster, Paul Verhoeven’s Total Recall, had done excellent at the box office, and all involved had been excited about making a follow-up to Cameron’s 1984 low budget sci-fi actioner: The Terminator.

Then it all went wrong. Cameron, it turned out, was a renegade director; a mercurial artist who (it seemed) could feign producer-speak only as long as it took for him to get the money he needed to make his film, at which point he transformed into a different, altogether trickier, customer. Suddenly all of the stories Kassar and Hoffman had heard through the rumour mill (“Think of root canal and start from there,” was how one Hollywood executive described working with the director) began to make sense. Only it was too late. And with the film’s budget creeping ever closer to – and eventually surpassing – $100 million, they were starting to panic.

“The big issue was that Carolco had given their bank one number that the movie was going to cost, but that wasn’t the number we had told them, and nor was that the number that they had agreed to with us,” James Cameron’s producer at the time, Larry Kasanoff, tells SFX. “And the press promptly found out about it.” Indeed, as would prove to be the case with every major Cameron production from this point on, the bottom line – which was the equivalent of almost four average film budgets at the time – was all anybody was interested in discussing. Not the groundbreaking special effects work. Not the fact that T2’s 13-year-old young lead, playing a youthful John Connor, had been plucked off the street with no prior acting experience (“It wasn’t something that I planned,” actor Edward Furlong would say later.) And not Cameron’s remarkable ability to shoot action scenes, the likes of which had never been seen before – and rarely seen since.

But although Terminator 2 ultimately proved to be the most expensive film ever made at the time of its release, Cameron kept on shooting; secure in the knowledge that the movie he was making was turning out to be every bit as great as he imagined it. “A lot of directors need a lot of producers’ help,” says Kasanoff. “Jim is not one of them.”

“Arnold was phenomenal,” Kasanoff gushes. “He was so unbelievably great.” It is little exaggeration to say that Schwarzenegger, at the time Terminator 2 was released, was one of the biggest stars in the world. Twelve years before he made the move into politics, and despite his heavily accented English, he was a born orator, the kind of person whose charisma and force of personality alone were able to dazzle people into going along with him. “The first time that I met Arnold, T2 had just been greenlit and we were in a meeting at TriStar [Pictures] to talk about it,” Kasanoff recalls. “He stood up in front of me and Jim [Cameron], the marketing and production VPs and the head of the studio, and gave a speech that just made you want to stand up and cheer. He said, ‘We did a good job on Total Recall, yes, but you have to wake up every morning and ask yourself what can we do to make this an even better movie. What can we do to make Terminator 2 the greatest film of all time?’ At that moment I honestly believed that if this man was American-born he would be the President of the United States.”

Is Terminator 2 the greatest?

The 25 best action movies of all time

Reprising his role as the Terminator (incidentally, check out the film’s specially-shot teaser trailer – directed by special effects guru Stan Winston on a budget of $150,000 – which details the construction process of the T-800 model), T2 acts as a neat bridge in Schwarzenegger’s career, bringing together the kind of tough guy Arnie-of-the-’80s with the kinder, gentler Arnie-of-the-’90s. “Here’s an example of how involved he was with every facet of production,” says Kasanoff. “One of the things I wanted to do was to put together a music video for the film, because back then if you could get a good music video it would get played 15 times a day on MTV. So I asked him whether he would do it, and he said, ‘Only if you get the best band in the world to do it.’ And I said, ‘Okay, who’s the best?’ And Arnold thought about it and came back to me and said, ‘If you get Guns N’ Roses I’m in.’ But to get them there was a lot of schmoozing with the band and Arnold and Maria [Shriver] invited the band over to their house for dinner one night, and sure enough they agreed.”

Also returning from the first film was Linda Hamilton, who once again portrayed Sarah Connor, in what was undoubtedly the biggest role of her career. Playing a stronger, more psychologically-robust character than she did in the first Terminator (noting the irony that she begins the movie locked in a mental institution), in this all-action sequel Connor had matured into the arse-kicking, gear-shifting heroine that James Cameron scripts (and possibly dreams) are made of. Originally Cameron wanted to underline this new harder edge to the character by giving her a prominent scar down one side of her face – even going so far as to do make-up tests – but ditched the idea when he realised how complex it would be to recreate the special effect each day of production. “I really wanted her to look like Tom Berenger in Platoon,” Cameron has said. “And Linda was up for it, because the last thing she had done was playing Beauty in Beauty And The Beast for three years.”

Although she narrates the film’s opening and closing monologue, what is most notable about Sarah Connor’s part in T2 is just how surplus she is to requirements. The leading women in James Cameron’s movies are generally maternal figures; a characteristic shared by Ellen Ripley – Cameron’s previous screen heroine in Aliens – and Connor in the Terminator films. In T2, however, Arnie himself plays the nurturing protector; his role as surrogate mother underlined by the figurative castration that is his inability to use his gun to its full lethal potential.

And neither is Connor needed to ramp up the sex quota of the movie. While movie bosses probably liked the idea of an attractive lady on the poster to help sell tickets (and Cameron – the person – himself obviously fancied Linda Hamilton, since the two got married a few years later), Cameron – the director ­– has only ever had eyes for high technology. The sex appeal in T2 is in the oozing 3D graphics of the liquid metal ­­­of the T-1000 and the fetishistic detail with which Cameron renders his favourite big vehicles (from the shooting script: “The Kenworth tow-truck … is all muscle, tearing along the canal like a train in a tunnel. Its big tires send up huge sheets of muddy spray, backlit in the setting sun”). Who needs a pin-up when you’ve got a big Kenworth tow-truck, eh?

If T2 had a long-term cinematic impact there can be little argument that it came from the film’s pioneering use of computer graphics. Cameron had toyed with using CGI provided by George Lucas’s Industrial Light & Magic visual effects company on his previous film – 1989’s The Abyss (in which every effect had to fit into 900MB of online storage) – but T2’s pre- and post-apocalyptic environment stretched the boundaries of what was possible to achieve with the effects of the day to almost breaking point. Most notably, of course, was the “nanomorph mimetic poly-alloy” T-1000 Terminator (played in eminently creepy human form by actor Robert Patrick). “The concept of the liquid metal man was an idea that I had had a good ten years earlier when I was conceptualising the first film,” Cameron has said. “There was no way to do it – Claymation was the only thing I could think of back in the early ’80s and I didn’t think that was going to be mind-blowing enough. So when we got to [Terminator 2] the residue of that early idea was still floating around, but in the meantime we had done The Abyss so there was some proof of concept that some kind of liquid character could actually be done. That ultimately became the T-1000. You’ve got to understand the morphing effects, which two years later were ubiquitous, had never really been done,” Kasanoff says. “The pressure on Jim to make sure that that was going to work was intense.

“People in Hollywood have a tendency to be sycophants as well – and to say what they think Jim wanted to hear, when he asked whether a particular effect worked or not – but obviously that’s not going to help once the film comes out. But thank god it all worked out in the end. And I think it changed the way that movies are made forever.”

Click here for more excellent SFX articles. Or maybe you want to take advantage of some great offers on magazine subscriptions? You can find them here.