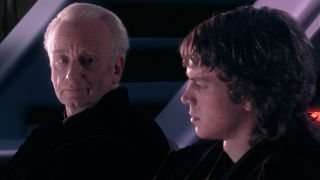 While Star Wars: The Rise of Skywalker director J.J. Abrams has every right to look towards the imminent future in a galaxy far, far away, he’s also reflecting on the movies that led up to this point. He’s even revealed which of the Prequel scenes was his favourite. Don’t worry, a certain Jar-Jar Binks doesn’t feature.

Did you ever hear the tragedy of Darth Plagueis the Wise? Abrams has – and told EW that the scene involving Chancellor Palpatine recalling the tale of the Sith Legend to a susceptible Anakin Skywalker was his personal preference when picking a standout moment from Episodes 1-3.

“There’s just something about that scene,” Abrams explained. “There’s just two people sitting there. It’s visually interesting. But I just think Ian [McDiarmid]’s performance in it is spectacular.”

Abrams also revealed the one obvious choice that he didn’t “love.” The interviewer, Dalton Ross, replied that his favourite Prequel scene was that of Phantom Menace’s climactic lightsaber battle between Darth Maul, Jedi Master Qui-Gon Jinn, and his apprentice, Obi-Wan Kenobi. Abrams was less of a fan.

“The reason I didn’t love that was only because I remember the posters that advertised Darth Maul – the feeling of ‘Oh my god, here we go!’ – then it was over,” Abrams admits. “It was over too quickly. This character I thought would be the beginning of something that would take me somewhere and I just remember when it ended I was like, ‘What?!’

Interestingly enough, Abrams is bringing back Ian McDiarmid, the shining light of his favourite Prequel scene in The Rise of Skywalker. His Darth Maul comments – and work throughout his career from Lost and beyond – hint that he’s very much a fan of the long game. Maybe the Emperor has one more tragedy to tell?

Make another wise choice: check out our Black Friday TV deals for the best discounts and bargains around.