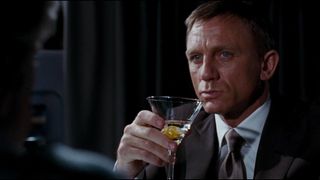 Recently, I attended Secret Cinema Presents Casino Royale. The experience was suitably immersive, but the part of the night I was most looking forward to was re-viewing the film on the big screen. Despite once wearing out a VHS copy of Diamonds Are Forever, Royale’s been my favourite Bond since Daniel Craig burst onto the scene in his much-too-tight swimwear in 2006.

Martin Campbell’s second stab at Britain’s beloved Secret Service agent was still every bit the muscular, Bourne-besting reboot I remembered, Vesper still the Bond girl to beat. But there was a rotten apple in the barrel and his name was... well, you know his name. Bond is, unequivocally, a right royal shit in Casino Royale. There was a time when I would have liked nothing more than to be 007. Now I wouldn’t want to be within 100 feet of his perfectly formed arse.

I’d always accepted Bond’s licence to kill as a necessary, nay cool, part of his oeuvre; but the Bond of Casino Royale takes a perverse pleasure in death in a way I found more than a little troubling. Shooting unarmed targets is one thing, but Bond’s self-satisfied smirk as he unflinchingly watches airport bomber Carlos blow himself up isn’t the reaction of a hero, but a psychopath.

And a full 11 years after Judi Dench’s M condemned Bond as a “sexist, misogynist dinosaur” in GoldenEye, he’s still stuck firmly in the Triassic Era in Casino Royale. Not only is there the flagrant lack of respect for M, and his utter indifference to getting Solange killed, but every interaction with Vesper would be grounds for dismissal if MI6 had a functional HR department. He comes across more like a cheap pick-up artist than a secret agent trained in the art of seduction. Even the beloved shower scene turns icky when Bond sticks Vesper’s fingers in his gob.

Clearly, Bond has always been a bastard. The casual racism and sexual aggression of Connery’s era, especially, can only be viewed as products of their time nowadays. And Craig’s reign has been far from free of controversy; Skyfall’s Sévérine and Spectre’s Lucia among the series’ most mistreated Bond girls. I’d naïvely remembered Casino Royale as being free of such problems, but now I’m not sure I can watch it the same way again. Or is it just me?