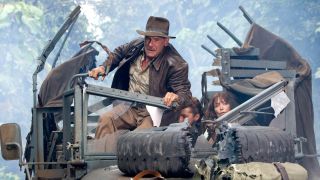 When Indiana Jones and the Kingdom of the Crystal Skull came out in 2008, it’d been 19 years since the whip-smart Professor Henry Jones Jr (Harrison Ford) had last graced our screens. No matter that the third instalment was entitled The Last Crusade – we believed that like we believed the fourth Friday the 13th movie really would be The Final Chapter (a fifth entry, A New Beginning, arrived a year later).

Point being, our expectations had gathered momentum like an unstoppable boulder, and only an insta-classic blockbuster would fulfil them. The Kingdom of the Crystal Skull is certainly not that. But nor is it the unmitigated disaster people claim. Giving it his grizzled all, the 65-year-old Ford proves as crafty, capable and lovably irascible as ever.

Set, cunningly enough, 19 years after the action of The Last Crusade, it’s 1957, the height of the Cold War, and Indy is battling Russian villainess Irina Spalko (Cate Blanchett with a Louise Brooks bob) to find what looks like Edward Cullen’s bonce. Whoever returns it to its secret tomb in the lost city of El Dorado will be granted mystic powers, or some such nonsense.

Admittedly, in aiming for the cliffhanger thrills of the matinee adventure serials that Indy doffs his battered fedora to, Spielberg and Lucas at times stray from rip-roaring spectacle into outright silliness – see biker boy Mutt Williams (Shia Labeouf) swinging through the jungle. And you’ll find no defence for that bloody CGI gopher here.

But there are standout sequences (the opening drag race, Indy running into the Spielbergian housing tract full of mannequins, the extended fight between hurtling jeeps), and I, for one, have no real issue with the macguffin… Indy’s always been a love letter to old movies, and this is him in the age of sci-fi B-pictures.

So before you slate The Crystal Skull, consider the following: 1) Temple of Doom and The Last Crusade are also far from perfect; 2) it’s a lot better than imitations like National Treasure, Sahara, and The Da Vinci Code; and 3) it’s no Star Wars prequel. Or is it just me?