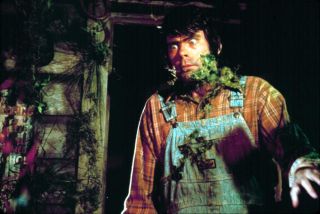 It's Stephen King's birthday today! You probably know him as that guy who wrote all those books, along with films like Carrie, The Shining, and that bit in Misery with the feet.

But for me, while I've read so many King books, my go-to memory is The Lonesome Death of Jordy Verrill, a segment of 1982's horror anthology movie, Creepshow.

Based on a bunch of King short stories and directed by George A. Romero, it's basically two of horror's best getting together on film (along with Tom Savini on special effects duty!) and the results are glorious.

You've got Leslie Nilsson burying Ted Danson in the sand to drown, only for him to come back as a seaweed covered revenant. A young Ed Harris being murdered by the rotting corpse of his mean ol' father, monsters in crates, and man killed by cockroaches.

It's brilliant pulpy stuff tying into its fake, in-film comic book origins, a magazine called Creepshow being read by a young boy.

The bit I'll always remember though is The Lonesome Death of Jordy Verrill. A segment based on King's short story, Weeds. In it, Stephen King himself takes the role of Jordy, a simple backwater hick living alone, who sees a meteorite land near his shack. Thinking it might be worth money and help him pay off a bank loan he tries to retrieve it, pouring water over it to cool it down and cracking it in the process. As a result he gets covered in 'meteor shit' and that's when stuff goes bad. His hand, and everything he touches, starts to sprout mossy alien growths.

Things rapidly get worse from there. The growths spread and Jordy's dreams of paying off his debts with the rock change to nightmares of hand amputation (relayed in deliciously cartoony sequences). It ends with King filling a bath tub and getting in, causing the alien plant to bloom. The radio reports on the weather being good for plants, and panning shots of the infestation, make it pretty clear he's just doomed all life on Earth as a result.

It might seem odd to remember King for his acting before his writing but as a kid this really stuck with me. For starters I watched Creepshow way too young making it an illicit thrill throughout. While King's performance (his screen debut) is surprisingly good - flipping between rambunctious buffoon and piteous simpleton as he realises his fate.

The choice - to stay out of the bath in a state of constant itchy pain, or plunge in and let the alien take over his body (and the world) - is not a great one. As a kid I felt so sad for his no win situation and watching King's childlike chat with a vision of his dead father as he contemplates death is oddly heartbreaking - "I got that stuff out of that meteor on me and I'm gone. Ain't I daddy?" It was probably one of the first times as a child I had to think about the idea of having no good options, and even the inescapability of death and disease, and it's always stuck with me.

Watch the whole thing below and see what you think: