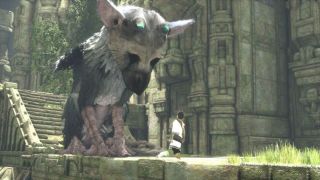 Games are not vacuum cleaners. That seems like an incredibly obvious thing to point out, but in the wake of The Last Guardian’s launch I found myself thinking long and hard about why certain reviewers and players had such extreme reactions at both ends of the spectrum – and concluded that not everyone agrees.

My experience of The Last Guardian was, admittedly, different to most. I played it on my own, from start to finish, over the Christmas break, having spent all night sitting up with a very poorly pet rat. Wilson, I’m sorry to say, slipped away that next day, but before he did I found myself resting on my sofa with him curled up by my side, and me alternating between stroking him while he slept and playing through another section of The Nest. When I reached the hand-feeding scene in which Trico’s almost motionless at the bottom of a giant tower, the duality of my situation hit me with full force. The Last Guardian instantly became one of my favourite titles of 2016 and, indeed, of the entire PS4 library.

You see, I’m a gamer who likes being fed through the wringer. Any kind of emotional transaction – whether I’m made to feel strong waves of sadness, anger, fear or anything else – seriously pushes  my buttons. It’s why I always want to play horror games (and am bitterly disappointed when the fear fails to materialise). It’s why Jazzpunk, the first game to make me properly belly-laugh in years, gets a big thumbs up from me. It’s also why Mass Effect 3’s Paragon-favouring plot twists really let me down (I’m one of the few people who shot Mordin Solus in the back to sabotage the genophage project for extra war assets, and felt ripped out of the fiction when I learned that ducking the difficult choices and playing the good guy would have earned me so much more).

That TLG scene tore into me like nothing else I’ve ever played, and when I finally hit the credits I eagerly read some other takes on its impact... and was dismayed to find some reviews that felt like teardowns of household appliances, nothing more. Through hours of shared journeying, The Last Guardian made me fall in love with Trico. I genuinely adored that monster; an astonishing feat for a game to achieve. Who the hell loves a Dyson? (Actually, don’t go there.)

I’m not going to pretend I didn’t find the camera occasionally irksome (I did), or that Trico followed my every instruction without fail (it didn’t – but I’ll forgive that on the grounds that I bought into the narrative and decided the beast shouldn’t be 100% obedient). Yes, I occasionally needed to be patient when waiting for Trico to behave early on, but what were all those years of delays doing if not teaching us the virtue of patience?

I relish reading pieces that vary from my opinions because different points of view are the lifeblood of debate and discussion. My own review would have talked more about those niggles and why I forgave them – but I’d have still ended with a 10/10 score, which OPM give to: “The kind of phenomenal experience rarely seen in a console generation.”

Matt is former editor of Official PlayStation Magazine, his favourite games include Skyrim, Final Fantasy VII, Braid, Shadow Of The Colossus and Puggsy, and when he's not grinding away in Destiny you'll often find him talking about WWE or NFL (go Seahawks!).
See comments