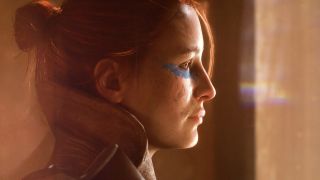 The concept of having female characters in Battlefield 5 has been a contentious one. When the game was first revealed in May, the outcry could be heard from space. Trolls angry at seeing women in BF5 stirred quite the response, particularly under the hashtag #notmybattlefield on Twitter, to the point that Oskar Gabrielson, General Manager at DICE, had to tweet a response two days later to tell people that women would be "here to stay".

We want Battlefield V to represent all those who were a part of the greatest drama in human history, and give players choice to choose and customize the characters they play with.May 25, 2018

And later former EA Chief Creative Officer Patrik Soderlund said that anyone who didn't like women being in Battlefield 5 might as well not buy it. "We stand up for the cause, because I think those people who don’t understand it, well, you have two choices: either accept it or don’t buy the game,” he said in an interview with Gamasutra. “I’m fine with either or.” Heck, they've even gone as far now to admit that it's a "shame" women weren't featured in Battlefield 1 too.

Now obviously, as a female gamer, it's refreshing to see so many game developers working on improving diversity across the board. But until I got to play Battlefield 5 as a woman, I didn't realise just how powerful it could be in practice. At Gamescom, I got to play the game's multiplayer mode, Conquest, on the new Rotterdam map, which is a beautiful - yet brutal - recreation of Rotterdam mid-WW2. I spawned onto the map directly, not realising that my entire squad was made up of women. On paper, that might not sound like anything special, but it's the way Battlefield 5 integrates your character that really makes the difference.

Like in previous Battlefield games, when you're downed in multiplayer you get two choices - wait for a revive, or simply just bleed out. But, this time around there's a twist on that option. While you wait there, bleeding out, you can actually call for a revive and you'll hear your character yell for help. Hearing a very British female accent scream for help, saying she's dying and needs someone, now, desperately, is a seriously affecting moment. That could be me lying there in WW2-torn Rotterdam, blood pooling on the cobbled streets, actually me, British woman me, and that makes the entire Battlefield 5 experience even more intense. Even just running along and hearing a woman breathing heavily heightened the immersion.

Hearing female voices cry out over the tank growls, grenades and gunfire is an insane experience in something like Battlefield, and watching your avatar gunned down and lying prone as a woman is almost humbling, regardless of whether I'm playing as a British or German female soldier.

Battlefield 5 learns from Fortnite and Destiny, aiming to be the only shooter you’ll need this year

I've been playing Battlefield titles, and other major FPS titles like Call of Duty, for a long time. And yes, of course, this isn't the first big multiplayer-focused FPS to put women in the game. Call of Duty: Black Ops 3 and the upcoming Black Ops 4 both feature female operators, as does Rainbow Six: Siege, and of course Destiny in various shapes and forms of femininity. But it's the amazing sound inherent in Battlefield 5 that changes the way you feel playing as a female character. You're not just a female form, but closer to a living, breathing woman, one who feels pain and gets killed, just as you have with male avatars for years previously. I honestly had no idea what kind of difference it would make for me as a player.

It doesn't take anything away from the brilliance of the game either. I've only played a slice of the entire package that DICE will provide come October, but Battlefield 5 is still very much a premium WW2 game. Despite what some players think, it is historically accurate to have women fighting in the war for Britain (Google the ATS, the Wrens and the Waffs people), and it's just an added bonus that I feel so represented by a game. Not everyone will want to play as a woman, granted, but why not have the choice to be whoever you want to be inside a digital world, and be historically accurate at the same time?

And thankfully the female presence isn't just limited to multiplayer either. DICE has already confirmed that at least one of the game's single-player War Stories will feature a female protagonist. So far the team has showed off a War Story called Nordlys where you play as a young, female, resistance fighter who will eventually have to pay the ultimate price. It's a refreshing change, and I for one can't wait to see how DICE's portrayal of WW2 plays out when it arrives on October 19.

Battlefield 5 is coming to PC, PS4 and Xbox One on October 19.