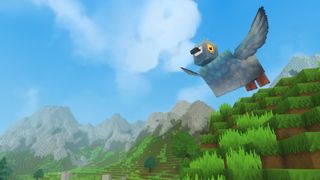 Edge Magazine has had a world exclusive look at Hytale, and how its Model Maker works in their latest issue, 342, which goes on sale today.

In its cover feature on how Hytale is looking to radically evolve the blockgame genre, Edge has spoken to the developer who is (mine)crafting the game, and got a look at its Model Maker in action. Publishing lead Chris Thursten explained to Edge how it works: "This is a kind of a modding interface, functionally, or customisation interface that touches almost every aspect of the game and it can be used on the fly to change a hell of a lot of things.”

An example of this is when Thursten's avatar turns into a pigeon. It's not just any silver-winged bird though, but one that has a sword perched underneath the aforementioned wing, which isn't just a cosmetic touch, but actually functional in the game. Content lead Sean McCafferty expanded on how weapons working with any character is possible, as the engine can share animations across different models due to a naming convention it uses.

It's more than just models that you can tinker with in Hytale's world, as you'll also be able to change the weather, time of day, and so much more. Plus, if you have the permission of the owner of the server you're playing on, all of this can be done without reloading in the game. Thurtsen explained: “What this means functionally is that there’s no sending files between modders as they work on a custom game.”

To discover more about Hytale, from its evolution from a Minecraft server called Hypixel to a standalone game built from scratch with a custom engine and a launch trailer with over 54 million views, make sure you pick your copy of Edge 342. Or, why not subscribe to get it delivered to your door every month? It even comes with a gorgeous variant cover to boot.