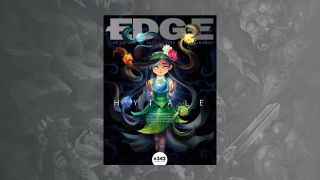 As you might have noticed, the year 2020 heralds the arrival of a new generation of consoles. Currently, however, with both PS5 and Xbox Series X shrouded in relative secrecy, the focus is on the platforms themselves. No doubt there will be the traditional advances in fidelity we expect from a newly raised power ceiling. But this time will be different. Microsoft is launching a new console with no exclusives. Sony has turned its back on the biggest videogame show on the planet. The lesson here is that we must reexamine the meaning of the phrase ‘next-generation’. That applies not just to consoles, but to games as well.

Enter Hytale. In Edge 342, which goes on sale today, we lift the curtain a game whose voxel styling belies the fact that is a true generational leap for the blockgame. While its creators shy away from the comparison, it is perhaps best thought of as Minecraft for a new generation – but not in a traditional sense.

Minecraft started life as just a game, but was turned into something else – a platform, a social space, a scene – by its community. Hytale is what happens when the leading lights of that very community make something that ticks all those boxes from the very start. If the stats are anything to go by – with 54 million views and counting, its announcement is one of the most-watched trailers in YouTube history – the crew at Hypixel Studios might just be onto something enormous.

Edge 343 is on sale now, available in all major UK newsagents and through digital stores worldwide. It looks like this:

Subscriber copies were delayed to adhere to an embargo, but will also begin arriving today. They feature this exclusive cover with bespoke foil treatment.

Here’s a glimpse at what else awaits inside.

You likely know Naoki Yoshida as the man credited with rescuing Square Enix’s near-disastrous Final Fantasy XIV. What made him the person the publisher’s then-president turned to when the chips were down? A career spent as a fixer. In Collected Works this month, Yoshida walks us through the CV that led him to the biggest rescue job of all.

The Room VR: A Dark Matter

Fireproof’s The Room series has been a tremendous success on iOS, with players in the millions revelling in the joys of getting up close and personal with the studio’s devious little puzzle boxes. Its first foray into virtual reality takes us closer and, erm, personal-er still. We visit the Guildford studio and give its latest a good rattle.

For more industry-beating access to the very best that the videogame industry has to offer, why not subscribe to Edge? You’ll save on the cover price and have your copy delivered to your door (or device) each month, complete with exclusive subscriber covers.