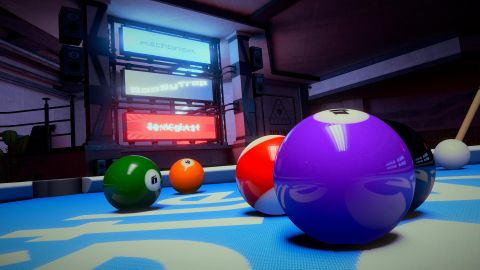 Like its console counterpart, Hustle Kings on Vita isn't visually flashy; there's enough color and detail to set the mood, but not so much that it distracts from the gameplay. Backgrounds are a little less busy on Vita, but the differences between the two versions are barely visible. This one wasn't exactly a graphical powerhouse on the PS3 anyway, so accurately replicating its look isn't a problem on the horsepower-pushing portable.

Of course, this a pool sim, not a painting, so how it handles takes precedent over how pretty it is. Thankfully, traditional button, trigger and stick controls will feel comfortably familiar to anyone who's played the PS3 version, or clutched a DualShock at all for that matter. While it's a close copycat of the title that spawned it, Hustle Kings does add Vita-specifc touch controls. If you've played other titles utilizing the device's tactile screen and rear touch pad, you've likely found them more frustrating than fun. However, unlike, say, Wipeout 2048, which requires accuracy and speed—a combination that's too complicated to pull off behind imprecise touch controls—Hustle Kings only relies on the former. So, surveying the table with a swipe of the screen, or lining up shots with a finger is an intuitive affair. Even mechanics requiring a bit more finesse, such as taking shots and setting their impact is effortless. This option will no doubt go ignored by gaming purists, but it's nice to know Vita's touch-play potential amounts to more than a gimmicky back-of-the-box bullet point.

In terms of content, Hustle Kings has plenty. It'll feel too like deja vu to those who've played the PS3 version, but budding billiards pros can look forward to a brimming career mode—complete with varied challenges and game types—as well as a customization-encouraging currency system. While the campaign is both deep and addictive, later challenges can become a bit daunting; seasoned snooker players will likely warm up to the late game's steeper learning curve, but those less dedicated might feel like impaling the tougher AI opponents with a cue stick.

Thankfully, players can also visit the virtual pool hall online. In addition to a number of traditional game and event types—supported through cross-platform, ad hoc ,and infrastructure settings—there's a push notification-enabled Message Play mode that's an especially good fit for the portable platform.

Hustle Kings graphics won't set your Vita firing on all cylinders, and those who've already chalked their cues on PS3 won't find much reason to replay it. No doubt a niche offering, but it does what it sets out to do really well and is perfectly suited to on-the-go gaming sessions. It's no poster boy for PlayStation's slick new toy, but if you'd rather play pool than chase fortune and glory alongside Drake, you won't find a better option.