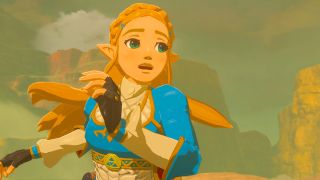 Ever since The Legend of Zelda: Breath of the Wild was announced, the most die-hard fans have put on their green detective caps and tried to place the game into the series’ complicated timeline. There has been no official statement from Nintendo, but that hasn’t stopped folks from puzzling over every frame of footage and scrutinising each image to determine the identities of its characters, locations and links to previous titles. We’ve searched the depths of the web to find the most popular Breath of the Wild theories, and equipped our trusty Lens of Truth to see which ones hold the key to unlocking the game’s secrets.

Yes, it does appear that the Great Deku Tree is making a fond return in Breath of the Wild and he’s looking, well, pretty great. His trademark eyes and moustache that he sported in his Ocarina of Time debut are instantly recognisable, and resting underneath him is a rather rusted and broken Master Sword. The Great Deku Tree’s presence in Breath of the Wild would explain why the Koroks, also known as Forest Spirits, are present in the woodlands that both lead to and surround the guardian of the forest. They’re rather easy to miss on first viewing, but upon closer inspection they seem to be leading Link to the Great Deku Tree and Master Sword’s location.

The Master Sword has been known to reside in the Lost Woods during the Fallen Hero Timeline when Link, despite his best efforts, is defeated by Ganondorf in the final battle of Ocarina of Time. This timeline results in Ganondorf obtaining the remaining Triforce pieces from Link and Zelda, but is trapped within the Sacred Realm by the seven Sages. This timeline branch contains the events of A Link to the Past, the Oracle series, Link's Awakening, A Link Between Worlds, Tri Force Heroes, The Legend of Zelda, and The Adventure of Link. From this information we can then theorise that the events of Breath of the Wild could take place during the Fallen Hero Timeline after the events of Ocarina of Time. This would also explain why the Master Sword now appears in the Lost Woods and why the Kokiri have evolved into Koroks.

Why are the Kokiri now Koroks?

Eiji Aonuma also gave the following statement when discussing the development of Wind Waker in the Japanese booklet, Zelda Box: “We created the Rito as the evolved form of the Zoras that appeared in Ocarina of Time, and the Koroks as what the Kokiri became once they left the forest.” In Breath of the Wild the Koroks appear to be scattered throughout the land, with many living within the forest that surround the Great Deku Tree. This information has led many to believe that the Kokiri were forced out of their forest home due to the impact Calamity Ganon has had on the surrounding land.

It also appears that Twilight Princess HD wasn’t just a remaster intended to tide fans over. Instead, it’s been found to have strong ties to the Breath of the Wild. Even Aonuma gave the following statement to Famitsu back in April: "When I look at this [Twilight Princess] remake, I feel like this is the origin point of the new title we’re making right now. After playing [Twilight Princess] you may have some "Oh I see!" moments when playing the new [Wii U / Switch] game." Aonuma’s words certainly ring true, as in the Life in the Ruins trailer we get our first glimpse of Hyrule Castle and the remnants of its town below. The only distinguishable structure is a dilapidated fountain bearing a shattered Hylian crest. However, this fountain has striking resemblances to the one seen in Twilight Princess’ Castle Town. Take a gander:

As you can see the resemblance is uncanny. Both fountains have a Hylian crest that are raised on a circular base and feature stone steps around the edge. Twilight Princess’ town was also situated in the same location outside Hyrule Castle, but if that wasn’t enough proof we can also see the exact same red flags that decorated Castle Town in Twilight Princess. However, the links don’t just stop there. Breath of the Wild puts a huge emphasis on bird people, with many fans believing them to be depictions of Rito, or even an evolutionary state of Skyward Sword’s Loftwings.

Return of the Rito?

We’ve not seen many bird people outside of the Wind Waker timeline, but Twilight Princess HD added some new carvings on the walls of Hyrule Castle that hint towards some of the “I see moments!” Aonuma mentioned in his interview. If you take a closer look at the wall behind the fountain in Castle Town you can see some carvings that depict two Rito, a Goron, a Zora, a mystery woman and what appears to be a young Link. It’s all rather confusing and we have very little to go off here, but many fans believe this secret holds the key to the events that precede Breath of the Wild.

Who is the old man?

We first saw the Old Man at the beginning of Breath of the Wild’s E3 demo last year. Link encounters him soon after leaving the tomb where he was asleep. After speaking to him, we learn that he has lived in this area for a long time, which happens to be the ruins of the old kingdom of Hyrule. He tells Link about the current state of the land, and offers him free items. We have found that later into the game, he will also offer to trade for orbs found in the Shrines across the land in exchange for valuable tools like the Paraglider.

Many fans have since speculated that he could be King Daphnes from Wind Waker due to his appearance and similar theme music. However, the series has featured a plethora of strange, old men so this could just be coincidental. The King is also missing his distinct Hylian blue eyes, but this wouldn’t be the first time a character has disguised their eye colour. Keep in mind, When Zelda was disguised as Sheik, her eyes were Red.﻿ An alternate perspective is that the Old Man could be one of the Seven Sages and Hyrule’s leader during the Downfall Timeline. In A Link to the Past, the Seven Maidens, including Princess Zelda, were revealed to be descendants of the Sages. With his long beard, regal theme and knowledge of the fate of Hyrule, the Old Man will likely play an important role in Breath of the Wild.

Could the Link in Breath of the Wild be the resurrected Hero of Time?

Many fans believe the Link we see in Breath of the Wild could be the resurrected Link from Ocarina of Time. We know that Link has been asleep for 100 years and has reawakened from his slumber to free Hyrule from the darkness once again, but we still don’t know why he has been asleep for so long. Theorists have speculated that Link was placed within the Shrine of Resurrection by the seven Sages following his defeat against Ganondorf in the Fallen Hero timeline. It’s certainly an interesting theory, but it’s not without its flaws. Firstly, the Link we see in Breath of the Wild looks completely different when compared to the Hero of Time. They also wield the Master Sword alternatively, while their fighting stances are purely unique to them. Here’s a quick comparison:

It would be a strange move if Nintendo changed the Hero of Time so fundamentally after all these years. However, we do know that Link in Twilight Princess transitioned from being left handed on the GameCube to right handed on the Wii to suit that system’s controllers, but we don’t think Nintendo would make such dramatic changes to the Hero of Time unless there was a valid reason. Of course, any of these theories could be found to be true, and until we get our hands on Breath of the Wild we won’t know for certain.