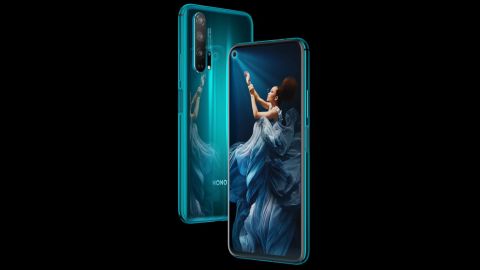 A fantastic phone for gaming, with superb battery life, plenty of power, outstanding cameras, and a large screen. If it stays on Android, the Honor 20 Pro is essential.

Much has been written about the tensions between Huawei (Honor’s parent company) and Google, with the potential removal of future Android updates from Honor devices a big talking point. But very little has been written about what a superb phone the Honor 20 Pro is, and how fantastically it performs with games. However the whole Android issue works out, I can safely say that the 20 Pro surpasses the Honor View 20 as a gaming device, putting it firmly at the top of our list of best gaming phones.

It's currently available in the UK, and throughout most of Europe, although there's no word on when it's headed over to the US. Honor is a brand aimed squarely at the youth market, and this phone is fully specced to serve that audience.

The 20 Pro is a decent size without being something that won’t actually fit in your pocket - it sits neatly between the size of the Galaxy S10 and S10+ with a 6.26-inch screen. While the screen isn’t edgeless, the bezel is very thin and there’s no loss of screen real-estate for the front-facing camera, which is embedded neatly in the top left corner. As with previous Honor phones, the fingerprint scanner is located neatly on the right-hand side of the handset, and is inset so you don’t confuse it with the volume button, also on the right hand edge. The USB-C charging port is on the bottom, and the connection is a snug fit with the charger, so it won’t slip out if you bump your phone while charging. Sadly, there’s no headphone jack on this phone, which continues to be a glaring omission, particularly on gaming phones.

The rear of the 20 Pro has what Honor refers to as ‘Triple 3D Mesh’, which basically makes the back color a deep, mirrored green or purple. It’s fun, if not quite as sexy as Honor thinks. The star of the phone, however, is the quad camera set-up: a 48 MP f/1.4 main camera; a 16 MP wide-angle lens; an 8 MP telephoto lens with a 3x optical and 30x digital zoom; and a 2 MP macro lens. While this camera set-up is incredible, it has a fatal flaw when it comes to gaming - you can’t lie the phone flat on its back. The camera sit proud of the rear surface, so the phone wobbles when you touch the screen, if it’s laid on a flat surface. Shame.

When it comes to features, there’s plenty on offer. The Pro 20 runs on Android 9.0, and it’s as fully customisable as most other Google systems. The Pro version comes with 8GB of RAM, and has Huawei’s excellent Kirin 980 chip as standard, which chews through any applications you throw at it. You get 256GB of internal storage here and that’s plenty, negating the need to add a MicroSD card for extra space. Even hefty games like Fortnite Mobile only require about 4GB (after update), so there’s loads of storage for everything you could possibly need, unless you’re constantly shooting video.

The screen itself is a 2340x1080 touch screen, which is both responsive and sturdy. Even touches on the edge, vital for some games, register with consistent accuracy. Gesture controls are smooth, and there’s never any stuttering or lag when transitioning between apps. While this isn’t a 4K or even QHD screen (1440p), it’s bright and clear enough for a phone of this size, even if some of the apps appear a little chunkier than some higher-definition screens.

The camera performs fantastically, with the main 48 MP lens producing incredible depth to portrait images. The wide angle lens is less impressive for landscapes, and while the telephoto lens does an admirable job with the 3x optical zoom, it performs less well when you bring in the digital zoom. The macro lens is fun, but with such a limited shooting distance and a relatively slow shutter speed, it can’t challenge specialist DSLRs equipped with most prime lenses. All that said… the 20 Pro is a fraction of the price of a full camera and lens set-up, and its snapper easily out-performs the one on the iPhone XS, and narrowly nudges the Galaxy S10. The AR mode is cute, there are pro lens control options for more serious photographers, and I love the light painting option too, which brightens up a subject in darker shots.

Here’s where we get into the true gaming muscle of the 20 Pro. This phone is a gaming powerhouse, fine-tuned for the best Android games and the way you want to play them. Fortnite runs at an unbelievably smooth 60fps, and Honor has been very forthcoming about how the 20 Pro outperforms every rival handset for the game. I can confirm that it’s an incredible experience smashing through Fortnite, with the connection sturdy, the motion slick, and the sound perfectly presented either via headphones or the internal speakers. My only complaint is something of a game design decision, in that it became too easy to accidentally press the wrong on-screen buttons while playing. Hardly the fault of the 20 Pro, but it does highlight the shortcomings of playing an increasingly involved and complex game on a standard-size handset.

Elsewhere, I tested Cultist Simulator to see how the phone performs with more precise, timed inputs, and it did an admirable job. The screen is just about big enough to handle the placement of cards, and the organisation of your deck, with the smaller text legible and clear enough. It was easy to cover the screen in fingerprints, and the rear does tend to get pretty smudged up during longer gaming sessions. Something more simple like The Battle of Polytopia shows off the screen well in portrait mode, and the chunky objects and bright colors look superb on the 20 Pro’s display. Obviously, the phone’s internals barely break a sweat playing either game, or switching between them.

What impresses most in terms of gaming, however, is the battery. The 4000mAh battery in this is fairly standard, but because the screen is an LCD display, and there are some smart tech features built into the phone to optimise use for games and reduce battery drain, it lasts far longer than you’d expect. We gave it a heavy use test of games, videos, and social media and a single charge will last most people for about 36-48 hours (far more than most rivals, but slightly less than Huawei’s own P30 Pro). After just over an hour of Fortnite, we dropped the battery by about 9%, which is something of a miracle considering how demanding the game can be. And because this phone has USB-C fast-charging, you’re ready to go again in under two hours, even if you zero the battery.

Overall - Should you buy it?

Well, under normal circumstances, it’d be a resounding ‘yes’. Even with small annoyances, like the lack of a headphone socket, the camera sticking out from the rear, and the relatively low resolution of the screen, the Honor 20 Pro is an immense phone. It’s perfect for gaming, and has the kind of features that younger audiences - who the Honor brand is very much designed for - crave. It’s stylish, functional, and solidly built. The only caveat (and it’s a big one) is around that pesky ‘future of Android support’ issue. If Honor can play nicely with Google, and keep the phone up to date with the latest versions of the OS, then you should absolutely consider the 20 Pro as your next gaming phone. Especially as it clocks in at a very reasonable price of $650 / £550 new.

The Honor 20 Pro is available now in the UK.

Honor 20 Pro review: "This phone is a gaming powerhouse"

A fantastic phone for gaming, with superb battery life, plenty of power, outstanding cameras, and a large screen. If it stays on Android, the Honor 20 Pro is essential.