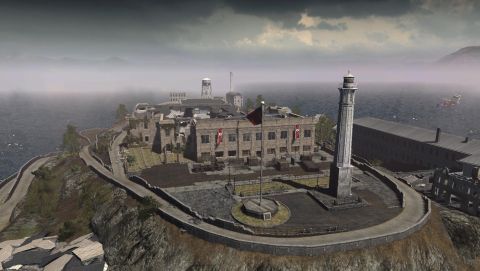 Since it was announced in early 2009, we’ve really been looking forward to Homefront. There’s something immediately appealing about a bleak, near-future shooter in which the US has been conquered by a brutal North Korean regime, and when you factor in that the script was written by Red Dawn/Dirty Harry/Conan the Barbarian scribe John Milius, the idea becomes goddamn irresistible. The prospect of pitched battles against faceless enemies in ruined-but-familiar streets, coupled with chilling, sharply realized visions of atrocities committed against American civilians, promises a level of emotional involvement and satisfaction (for Americans, at least) that most shooters simply can’t pull off.

With expectations that high, Homefront was bound to disappoint us in some way – it just wasn’t the way we expected. But we’re getting ahead of ourselves. Perhaps more so than any other recent shooter, Homefront is really two games: an occasionally poignant and extremely linear campaign that follows resistance fighter Robert Jacobs through semi-covert strikes against Korean invaders; and a radically different, insanely explosive multiplayer game filled with cool vehicles, remote-controlled drones and dozens of unlocks and customization options. To ensure that everything gets a fair shake, we’re breaking this into two reviews, starting with…

The good news about Homefront’s campaign is that sometimes, it actually does an amazing job delivering the outrage and dread that we hoped it would. The script is well-written and believable, and is peppered with disturbing scenes that can stir up some genuine rage if you’re invested in the story.

In the game’s opening alone, you’re forced to watch as men are suffocated with plastic bags, couples are forcibly separated and parents are shot in front of their wailing toddler. Later, you’ll see Koreans callously dumping hundreds of dead civilians into mass graves at what used to be a school’s baseball diamond. It’s horrifying, and it’s calculated to make you project yourself, your family and your friends onto the situation – and then to realize you have a gun, and can soak up dozens of bullets without dying.

At the same time, Homefront neatly avoids telling a jingoistic,“America, fuck yeah!” story, balancing its depictions of Korean brutality with sickening acts of cruelty by redneck survivalists later on, and showing that war can bring out the worst in everybody - not just the aggressors. It’s also careful to set up a believable backstory and credible motivations for its villains, the unified (but North-controlled) Greater Korean Republic, which you can uncover by finding newspaper clippings scattered throughout the game.

Above: Stop laughing, this is a horrible way to torture someone

However, because most of the game is confined to the small city of Montrose, Colo. (followed by a remote farm, a stretch of highway and a final battle on the Golden Gate Bridge), it doesn’t really measure up to the grand, sweeping vision of occupied America that Homefront’s pre-releasemarketing blitzdepicted. It’s still involving in its own right, but we were hoping to see a lot more.

Homefront’s dedication to story is great, but it’s also one of its biggest problems. For much of its short campaign – most players should be able to finish it in four to six hours – Homefront feels like you’re being walked through a museum exhibit. Significant chunks of the game are made up of non-combat or stealth sequences that amount to walkthrough cutscenes, like a tour of a resistance community or a clandestine observation of Korean soldiers being tortured, and these are punctuated by flurries of action that erupt when you hit the appropriate, pre-scripted marks.

That’s not uncommon for a shooter, but Homefront takes its rigidly scripted nature to a sometimes-ridiculous degree. For example, there’s a part during a stealth mission when your allies will mark a sniper target for you, and tell you to take the shot as soon as you’re ready. If you do, however, you’ll be “discovered” and have to restart from a checkpoint. Instead, you’ll have to wait while your teammates go on to further tell you about zooming and making the shot count. It’s only once they’re finished prattling that you’ll actually be clear to shoot.

That may seem like a small complaint, but the game’s full of moments where you can only take some small action – like crawling through a hole in a fence, for example – when your allies have already done so, or tell you to do so. Other games might deal with this by briefly taking control away for an in-game cutscene, or having your squadmates run ahead, but Homefront simply puts up an invisible barrier and waits for you to realize that you need to move out of your buddies’ way.

Couple that with checkpoints that are frequently set just before lengthy bits of unskippable dialogue and/or ally actions, and you’ve got an experience that can turn annoying fast.

When you’re in the thick of the action, though, Homefront isn’t half-bad. It’s not great, feeling like a more generic version of Call of Duty (with the same controls, even), but it’s fun for what it is, as you duck behind cover and gun down faceless enemies with a wide assortment of disposable, mostly unexciting firearms.

The largely suburban levels, while linear and sometimes surrounded by invisible barriers, are well-designed and interesting, and the game isn’t without some great moments. A battle through a burning TigerDirect store stands out as a particularly memorable example, as do the mission in which you pilot an attack chopper and the final assault on the Golden Gate Bridge.

However, those all pale next to any scene involving the Goliath. A roaring, semi-autonomous assault drone, Goliath crashes in like an angry bear to defend you and your allies at certain points through the game’s first four chapters. After a while, Goliath actually becomes a comforting presence; when it comes smashing through a wall in dramatic slow-motion (something it does a lot), you’ll instantly know you’ve been given the upper hand. Not only is it nigh-invincible, but using a remote targeter, you can order it to destroy pretty much anything that moves with a volley of homing rockets.

Above: That thing on the left is Goliath. You will quickly learn to love it

In the end, though, not even Goliath can rescue Homefront’s campaign from mediocrity. It’s clear that most of the effort here went into the story, as the gameplay isn’t anything remarkable and the visuals look rough and unpolished. And while the game doesn’t feel terribly short, given how long some of the firefights can go on, it can be played from start to finish in a single evening. That it ends on an unsatisfying, inconclusive note (clearly intended to leave the door wide open for sequels) doesn’t help, either. Those interested in the story should still give it a try, but it could have been a hell of a lot better.

It’s a lucky thing, then, that Homefront isn’t just a single-player campaign. To see what we thought of the multiplayer, head on to the next page.