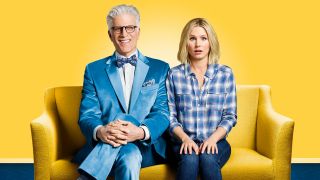 The problem with Netflix / NBC’s absurdly-addictive The Good Place is that you want to tell everyone to watch The Good Place – like, seriously, now – but can’t explain why. For the benefit of doubt: if you haven’t watched creator Mike Schur’s (of Parks and Recreation fame) sitcom: watch it now. All two seasons of it. Honestly, you won’t have much choice, and The Good Place is best watched – inhaled, even – with all the story in place. One GR+ team member watched all 13 shows of season one in an *evening*. Done that? All 26 episodes? Good. We’ve amassed all the best reads, philosophical nuggets, easter eggs, videos and secrets on ‘The best show you’re not watching’ (according to Collider) in one (very good) place below, and you can thank us this side of the afterlife.

***To be clear, there are some forking unbelievable spoilers below, so don’t be an ash-hole and ruin it for yourself. We’re unleashing everything once you scroll past Eleanor below.***

Still here? First up: Son of a bench, yes, the show is that good. And, no, we didn’t see that season 1 finale coming (and neither did the cast, but more on that below). And, yeah, there really was a raw fish stand called Sushi and the Banshees. And, ohmigawdbreaaaathe, Janet. Good Janet. Bad Janet. Uncertain Janet. We love *all* the Janets. We're so Janet.

It feels good to share, right? Without further ado, here are the best The Good Place reads, videos, secrets and more we’ve found on the web so far – and we’d love you to share your thoughts and links in the comments below.

Before you do anything, watch the moment that The Good Place cast (bar Ted Danson and Kristen Bell) learn about the season one twist. I mean, of course, they’re actors, but that’s *such* a Tahani reaction. And, yes, the cast weren’t told about the twist until the very end.

Seriously, though, how did show creator Mike Schur keep that twist a secret? By telling almost nobody and re-editing everything, explains Fast Company

“A huge part of the day-to-day work in the writers room was just making sure we weren’t doing anything that would contradict this giant world-changing twist near the end,” Schur says. “And that carried over on set, too.”, explains Schur. Scripts were reread and re-written multiple times to make sure they didn’t drop too many hints, or imply a wider mystery might be at play… yet still left multiple clues hidden in plain sight (see our next link). In his original pitch to Netflix, Schur had already plotted out the first two seasons, but still managed to deceive his cast and almost everyone who watched.

All the clues you missed about The Good Place’s season one twist, via Vulture

Did you know that Eleanor almost guesses the whole thing in the opening minutes of the pilot? “My parents were divorced when I was a kid. They were both crummy people, so they’re probably in the Bad Place. Maybe they’re being used to torture each other. It would work!”. We mean, it sure would. The most obvious clue, of course, is that heaven would have ice-cream, not frozen yoghurt. “There’s something so human about taking something great, and ruining it a little, so you can have more of it.”, explains tormentor-in-chief Michael.

15 of the best Janet lines, from Buzzfeed

All humans are powerless but to crush on D’Arcy Carden, and this Buzzfeed listicle rounds up some of her finest moments, while simultaneously excluding several hundred others.

The Good Place: How a sitcom made philosophy seem cool, from The Guardian

“It taught me about philosophy and made me think how I might be a better person”, is how GamesRadar’s Zoe Delahunty-Light described the show after watching all 26 episodes in a matter of days. Impossible as it sounds, The Good Place acts like a Philosophy for Dummies crash course, without darkening the tone, or ruining its flow. “Who’d have thought that ratings gold would be found in a sitcom about the afterlife, with regular references to Immanuel Kant, David Hume and Aristotle”, notes The Guardian. “There’s also a sweet blink-and-you’ll-miss-it joke name-checking utilitarianism’s greatest foundational theorist, Jeremy Bentham, as the trolley barrels past a movie theatre, the marquee of which displays its current showings of Strangers Under a Train and Bend it Like Bentham. This is a show that deeply respects puns.”

How The Good Place became an antihero antidote (i.e. why its belief in humankind is what the world really needs right now), by The New York Times

Let’s face it, we live in an uncertain, noisy and often depressing world, where ‘grey area’ heroes and tortured villains reinforce a sense of gloomy status quo, when we do, in fact, have a choice to be a lot more optimistic. “But the most refreshing thing about “The Good Place,” in an era of artistic bleakness, is its optimism about human nature. It’s made humane and sidesplittingly entertaining television out of the notion that people — and even the occasional immortal demon — are redeemable.” writes The New York Times.

Watch every time Tahani name drops a Celebrity in this four minute video, via Vulture

“Believe it or not, I actually found myself in a very similar situation a few years ago, except in that instance, Michael was Javier Bardem and the Bad Place was Vanessa Redgrave’s panic room”. This video is just *too good*.

The Good Place ends its remarkable second season with irrational hope, unexpected gifts, and a smile – season 2 finale review, from the AV Club

Season 2’s wonderful finale leaves us hanging until season 3 resumes in – likely – September 2018, but the AV Club’s review nails why it’s such a fine send off, and a premise reset to rival season’s one amazing twist. “Going into this finale, we know that, like last season’s last episode, the show has to set up a whole new reality for its next season, and the thought of watching each of these characters going amusingly bananas in their own personal hells of mediocrity was... fine. We’ve been spoiled, though. We need something better. And then The Good Place gives us better”. The s2 finale’s real reward is in its details, and meta-delights, not least Michael (Ted Danson), reprising his most famous role, as a barman turned life coach. “After all the waiting, and subterfuge, and psychological tortures, and flying shrimp, and 800-plus complete resets, all these little payoffs are like a series of wonderful, warming little presents. Like desserts. We’ve earned desserts.”

All the easter eggs you missed in the season 2 finale, from Indie Wire

Did you spot Tahani’s sister Kamilah on the truck advert? The triple meaning of Sting’s Desert Rosé? Eleanor googling ‘What does Despacito mean?’ It’s all right here.

You'll be delighted to learn that The Good Place is in our list of the Best Netflix TV Shows right now and season 2 made our 8 things to watch this week shortlist.