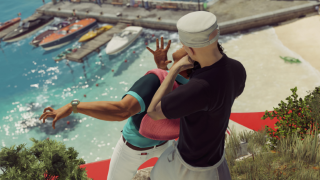 Hopefully the two months since Hitman's launch have given you enough time to master its mechanics, because the game is getting its first Elusive Target on May 13 - and you'll only have one chance to take them out.

When the Elusive Target goes live, you'll have 48 hours to track them down. Agent 47's handler will provide intel, but beyond that it's all on you: the target will not appear on your mini-map or radar. Should you fail or lose your target, they're gone. No second chances, do do-overs. It's one of the hardest challenges developer IO Interactive is inserting into the game, and I imagine pro players will be very excited by the opportunity.

Should you succeed at completing 5 Elusive Target contracts throughout Hitman's episodic release, you'll earn yourself the suit Agent 47 wore in Hitman: Absolution. Complete 10 and you'll don the suit from Hitman: Blood Money. IO hasn't revealed the new version of the Blood Money suit, but you can get a glimpse of the Absolution suit below:

If all of that Elusive Target stuff is too daunting, IO is also adding two new Escalation Contracts to the game this week. The Paris-based Escalation Contract revolves around using the battle axe, while the Sapienza-based Contract requires use of a priest costume and explosives. It's a good weekend to be an assassin.